Today, we benefited again from earlier MBARI efforts that mapped, and then surveyed, the Santa Monica South Canyon. Detailed bathymetric maps, generated by Dave Caress and Hans Thomas of the Mapping Autonomous Underwater Vehicle (AUV) Team, and processed by Krystle Anderson and Eve Lundsten of the Continental Margins Lab, allowed us to target large mounds that might signify active methane seeps. 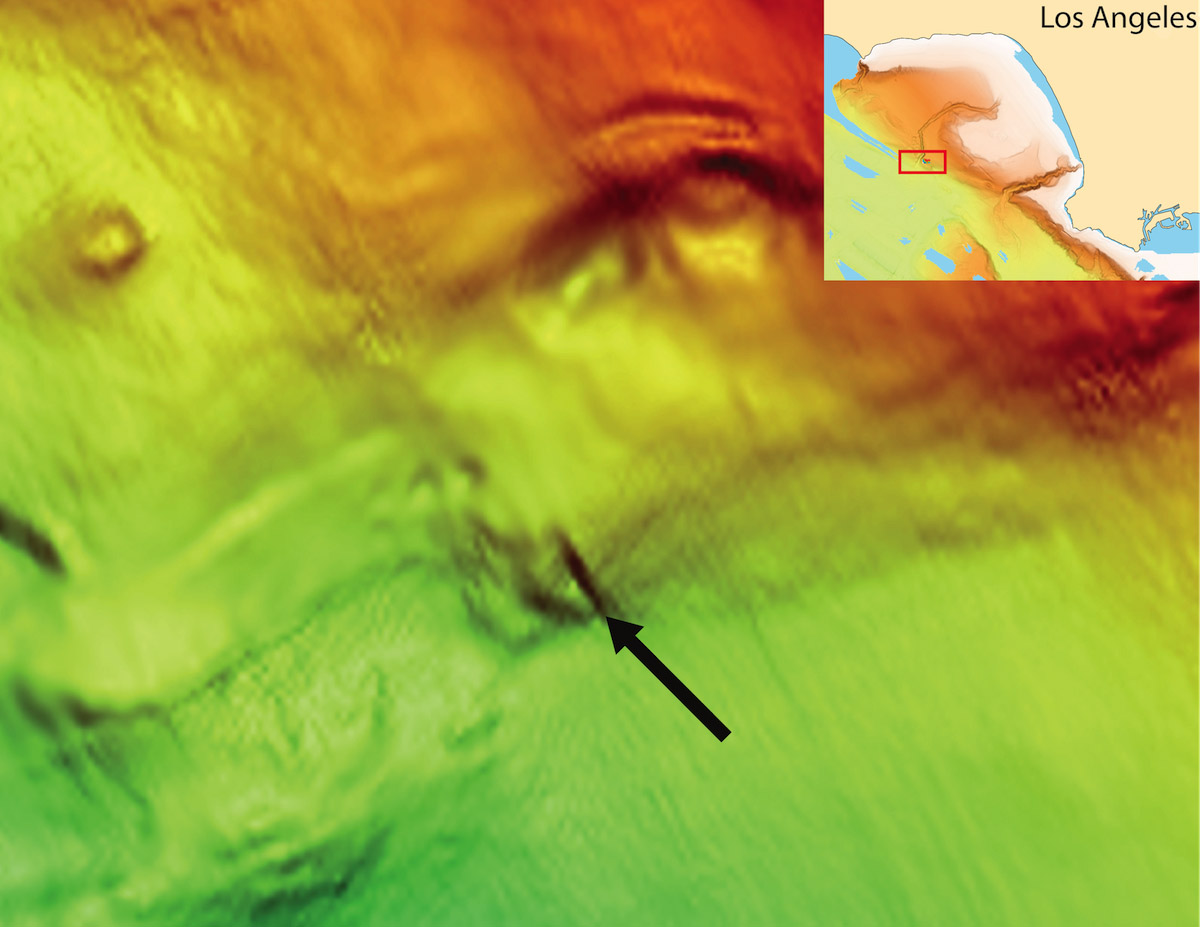 This image shows a map of the survey region in detail. Dives were conducted at 650 meters (2,100 feet) depth about 24 kilometers (15 miles) off Santa Monica. The survey region is visible as a red box on the inset map. The black arrow on the survey map shows an area that was surveyed in great detail and proved to be very interesting to the science team. See below for a more detailed mosaic image of the clam and worm reef that we found here.

The scientists on the previous leg of this expedition, led by Peter Brewer, sent us images of seeps with clams and worms that allowed us to target very specific locations for biological sampling. We were amazed at the immense field of clams and worm tubes at one of these mounds. When we explored the site we found extraordinary numbers of small elongate clams (typically less than five centimeters in length) so densely packed that they were jostling for position in the sulfide-enriched sediments.

These Ectenagena elongata clams were different from the larger clam species observed at the earlier seeps and Pedro’s whale fall. The clams in this family, the Vesicomyidae, host bacterial symbionts in their gills. These bacteria oxidize sulfides extracted by the clams from fluids seeping from the surrounding sediments. Because the symbionts are transmitted vertically through the clams’ eggs, each clam species in this family hosts a symbiont strain that has diversified with the host during the past 45 million years, a pattern called host-symbiont co-speciation. 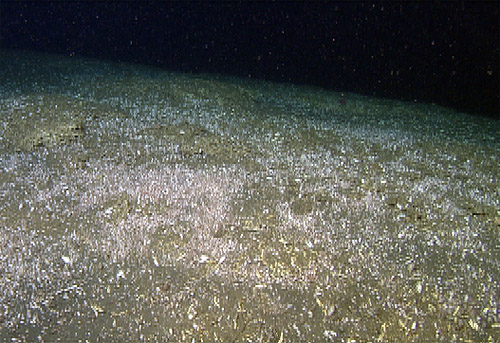 Not only were the fields of vesicomyid clams dense, they were also extensive, spreading over great distances in every direction from the ROV. 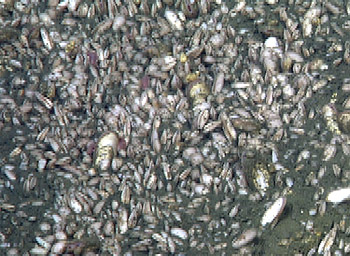 Ectenagena elongata clams occupying this field comprise the most extensive field of chemosymbiotic clams observed to date by the scientists. Although vesicomyid clams appear to be the most abundant and numerous organism, many other animals were found among the clams, including polychaete worms, several species of gastropod molluscs (or marine snails), and even thornyhead rockfish.

We also sampled large numbers of vacant tubes that team member Greg Rouse (Scripps Institution of Oceanography) believes were occupied by serpulid annelids. Many of the tubes were encased in soft mudstones of unknown age and were partially fossilized. Interestingly, the reef structure found at this site was completely composed of these subfossil serpulid tubes. Below the serpulid tube reefs we found large, subfossil vesicomyid clams. Atop these two layers were modern, living Ectenagena elongata clams in extraordinary abundance. These exposed layers were visible within fractured regions of the seafloor (identified on the map by the black arrow) and were at least two meters thick. Using images recorded by the HD camera, we were able to create a high-resolution mosaic image which clearly shows the different layers which make up the Santa Monica clam and worm reef. 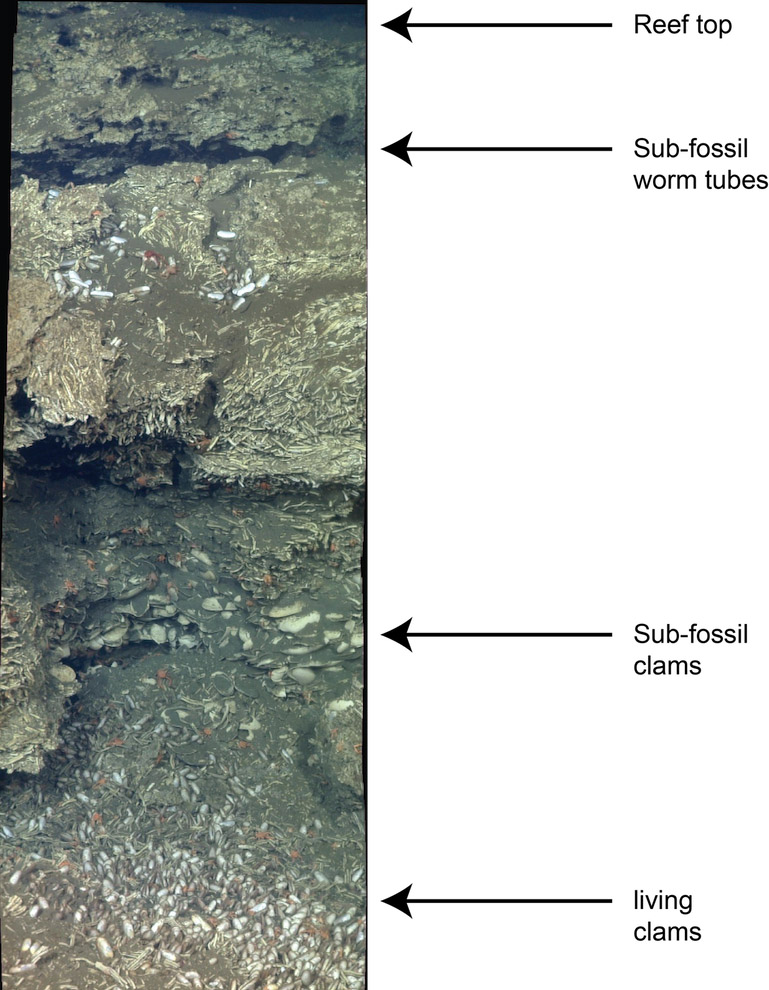 This mosaic image shows the bedding, or layers, in the clam and worm reef that we discovered today. From top to bottom, this image extends approximately two meters (six and a half feet) in height. What appears to be rock in this image is actually composed of subfossil serpulid annelid worm tubes, in incredible high densities. Underlying the tubeworm layer is a subfossil vesicomyid clam layer of a different species than the modern living clams we found. In the foreground at the base of the image are recent vesicomyid clams which are living in as great an abundance as the previous subfossil organisms once did, attesting to the productivity of this particular site through time.

We collected samples from the subfossil layers in an effort to characterize the habitats found buried here. We will send subfossil clam and worm samples to taxonomists to determine what species they belonged to and we will also use aging techniques to estimate the time that they were alive. Using species, age, and high-resolution seafloor maps we will try to reconstruct the past with an aim of better understanding and predicting the future of the ocean.

This dive illustrates the nature of high-tech research in the deep sea. Seafloor maps created by mapping AUVs allow us to accurately target areas of scientific interest. These areas were surveyed using remotely operated vehicles (ROVs) during a previous research mission whose aims were chemical and geological in nature. Using information gleaned from those previous science efforts, we were able to pinpoint areas of biological interest, which allowed us to observe a habitat that was unlike anything we’ve ever seen in Monterey Bay or the Gulf of California. This combination of state-of-the-art tools, interdisciplinary research efforts, and collegial collaboration between scientists allows MBARI to continue its tradition of excellence in studying the deep.

A special thanks goes out to the pilots and crew for a successful cruise! 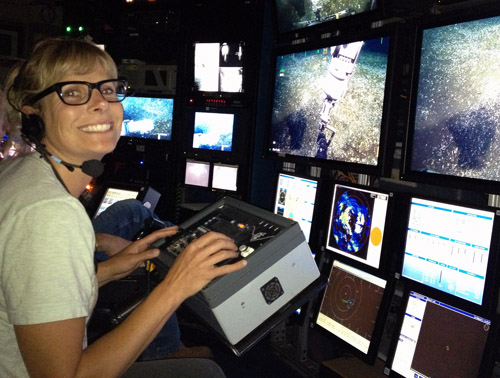 Shannon Johnson of MBARI’s Molecular Ecology Lab directs sampling efforts at one of the dense fields of Ectenagena elongata clams. One great aspect of using ROVs for deep-sea research is that the entire science party can view, interact, and engage during the dive, thus making the entire operation more efficient and successful.