A tale of two whales

We started our day with a dive at Pedro’s whale carcass, discovered by Peter Brewer and his team last week in the North Santa Cruz Basin. We were ordered to recover the vehicle shortly after the start of this dive because a naval operation was planned for this area. After a few hours, we were informed that we could return to the waters and continue with a second dive. 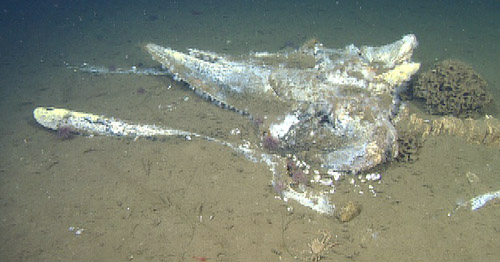 The skull at Pedro’s whale-fall site.

Pedro’s whale fall provided a stark contrast to the site we visited two days before at the Rosebud whale fall in the San Diego trough. Rosebud was covered with long, beautiful Osedax bone worms, a thick, fluffy, shag carpet of bacterial mat, shiny scale worms (we called “Liberace”), Dorvellid worms, and a few snails. Pedro’s whale fall was different. It was covered with the whale-fall anemone Anthosactis pearseae, provannid snails, Vesicomyid clams, and numerous chemosynthetic mussels from the genus Idas.

When we rinsed the bones collected from the site we also found very small Idas juveniles. Osedax bone worms were conspicuously absent from Pedro. We were buoyed by false hopes when we saw some Cerratullid polychates. They are good Osedax imposters since they have long, blood-red palps and were anchored on top of the bones in a muddy matrix. Often the sticky Osedax tubes are also covered in sediment.

We were overjoyed in the control room when we thought we spotted our favorite worms. However, we went “from heroes to zeroes in 30 seconds” when we quickly realized with sad hearts there were no Osedax on Pedro.

What was different? Why were Osedax abundant on Rosebud just 160 kilometers (100 miles) south of Pedro? Pedro had obviously been dead for a long time, based on the advanced chemosynthetic community. One marked difference between the sites was oxygen levels. The oxygen content of the seawater near Pedro was half of that recorded at Rosebud, which was already quite low. Perhaps the oxygen levels at Pedro were simply too low for Osedax to persist.

These findings may have implications with respect to climate change. In a warming ocean, seafloor basins such as this one with lower oxygen and shifting acidity may become more common. 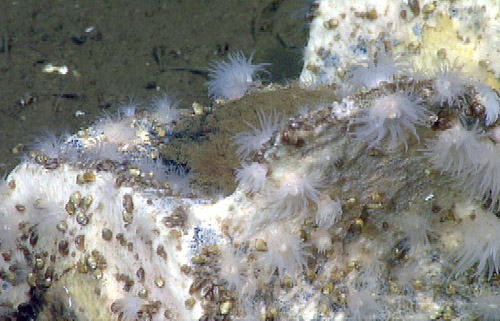 Numerous white whale-fall anemones, Anthosactis pearseae , on the vertebrae of the whale carcass. These anemones are named after Vicki Pearse, a collaborator and dear friend of ours in Monterey, California. The bone is covered in white bacteria, and a number of small brown mussels and snails are scattered about. 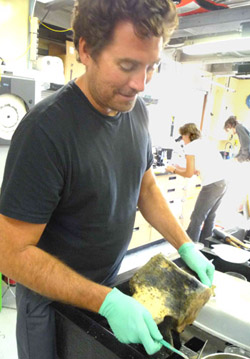 Lonny Lundsten works in the lab removing numerous Idas mussels from a whale bone. In the background, Shana Goffredi sorts through samples for juvenile Idas mussels and Ben Grupe works on his samples.

The genus Osedax was first discovered by MBARI scientists in 2002 living on a gray whale skeleton at about 3,000 meters (10,000 feet) depth in the Monterey Canyon. Since then, we have learned much about the role of these worms in recycling of deep-sea carbon, their phylogenetic relationships, and an unusual reproductive strategy that involves dwarf males. However, there are still many mysteries surrounding the nutrition of these animals and their association with abundant bacterial symbionts found in their “roots”. To examine the specific nature of the symbionts’ metabolism, we’re conducting experiments that exposed the animals and their symbionts to various substrates including sugars and amino acids that are artificially labeled with a heavy 13C isotope. Using subsequent microscopy and high-resolution spectrometry, we will be able to track the flow of organic carbon from the environment through both partners. Additionally, we will examine the RNA transcriptome of the bacterial symbionts recovered from the worms, which will hopefully reveal the true nature of their metabolic activities, while living inside of special cells in Osedax root tissues. 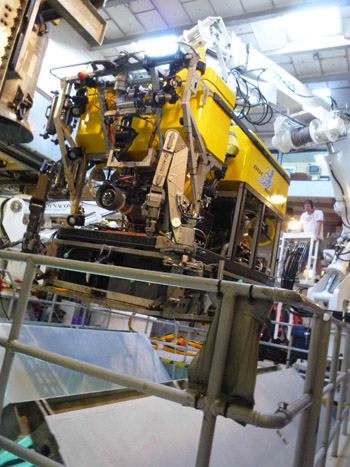 Erik Larson works the crane during the recovery of ROV Doc Ricketts. You can see the moonpool doors closing beneath the ROV.