Clam dig at a deep seep

We started our day with a remotely operated vehicle (ROV) dive at a methane seep mound visited by Peter Brewer and his team on May 14. We found extensive bacterial mats of different colors—orange, red, yellow, and white—some thick and flat, others long and filamentous resembling a furry shag carpet from the 1970s. We sampled tubeworms, clams, and snails from this area to compare with animals that we have collected at other seep locations. These collections will fill a geographic gap in our collections of chemosynthetic animals between the Northeastern Pacific, Monterey Bay, and the Gulf of California. More information can be found here. 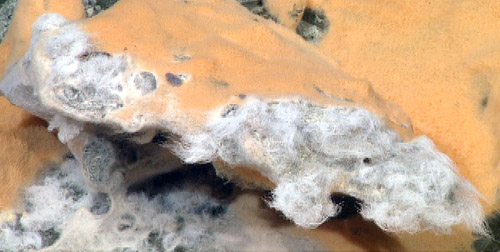 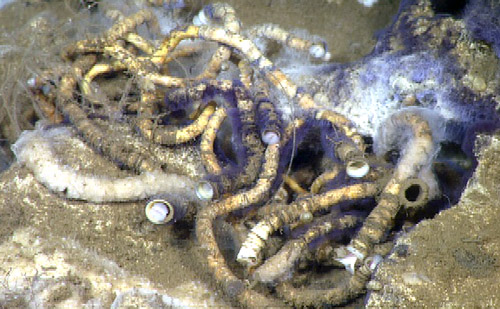 Tube-dwelling folliculinid ciliates sometimes form dense bright blue mats (growing on Lamellibrachia tubes in this image) resembling shag carpet, which grows at both hydrothermal vents and cold seeps [note: ciliates are a type of protozoan or single-celled eukaryote]. They have been observed in many locations worldwide and scientists onboard are interested in the ability of these ciliates to use methane emitted from the seep for energy. –Shana Goffredi 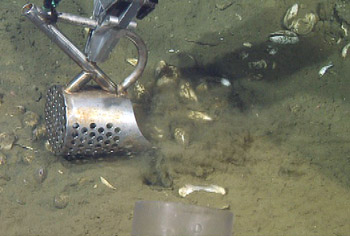 ROV pilots use the manipulator arm holding this clam scoop to dig for clams at seeps.

Lisa Levin and Ben Grupe from Scripps Institution of Oceanography have visited this site once before with the Scripps ROV. It was first discovered as a seep site during an expedition led by graduate students in July 2012, when they sampled the seafloor with a multicore and found chemosynthetic worms, a vesicomyid clam, filamentous bacteria, and carbonate rocks in their samples—signals that the area had active seeping. Returning in December 2012 with the Scripps ROV, these researchers observed the area for the first time with a video camera. Lisa and Ben join us on this cruise to quantify the diverse assemblage of organisms that inhabit this seep community. They’ve sampled everything from bacteria to large invertebrate predators, and will compare these samples to other seep communities they have previously investigated. Push cores were used to collect and analyze small animals (less than 0.3 millimeters) in the top 10 centimeters (five inches) of the sediment, and carbonate rocks were sampled to investigate the organisms that inhabit the surfaces. Previous research has found completely different types of communities occur on seep carbonates compared to sediments, so their research is designed to measure how the community structure and biodiversity of this seep vary among microhabitats. In addition, samples were taken 20-30 meters (65-100 feet) outside the seep to compare the organisms living on the surrounding muddy seafloor and determine if this community is also fed by chemosynthetic production. Information from this expedition will help the scientists develop detailed descriptions of who is living in and around seeps, and provide better understanding of the seep food web.