Our first dive of this series took place 10 miles west of San Diego, California, at a site where, 18 months ago, scientists from the Scripps Institution of Oceanography deployed a whale carcass. The dead whale had washed ashore in the Point Loma area near San Diego. It was towed into Mission Bay and inspected for cause of death. A veterinarian from SeaWorld in San Diego determined that this female fin whale had collided with a ship just a few days before it had washed ashore. After arranging all the equipment to sink it, Scripps scientists towed it out to this location and sunk it at a depth of 820 meters (2,400 feet) in an area with very little dissolved oxygen (about 0.2 milliliters per liter). At 23 meters (69 feet) in length, this is the longest carcass that we have examined. Scripps scientists were fortunate to visit the site six months previously on a private ship with a small remotely operated vehicle (ROV). Today we are diving with the ROV Doc Ricketts—a vehicle that provides beautiful imagery and plenty of sampling capabilities for our contingent of MBARI, Scripps, and Occidental College scientists.

First task for the day: to deploy a time-lapse still camera with whale bones attached to a platform beneath the camera. We’re calling this our “bone camera” since it will take a series of still images over the course of the next several months that MBARI scientists will analyze to determine when Osedax worm larvae settle on the bones and begin their feast in the deep. 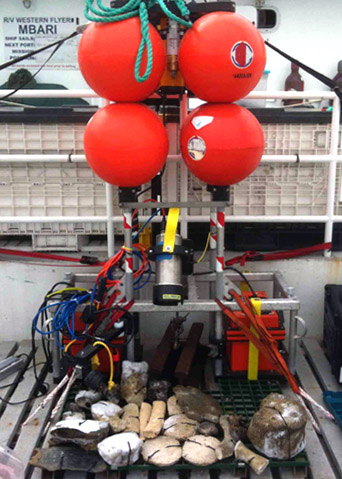 Scientists secured a number of whale bones to the platform underneath the camera (silver cylinder in the center). These bones were collected previously and are being returned to the sea. 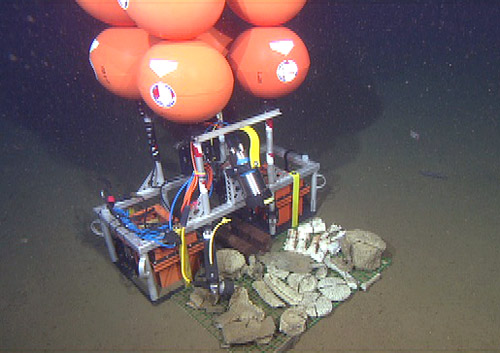 This is an image from the ROV of the bone camera deployed on the seafloor.

Scripps scientists Sigrid Katz and Greg Rouse, on board with us for this mission, recently published a paper on how these gutless worms consume bones by secreting acid from their roots to dissolve the bone matrix and retrieve the protein collagen. The bacterial symbionts living inside the worms probably use amino acids from collagen to provide energy to the worms. Shana Goffredi from Occidental College is investigating the biochemical links between these worms and their symbionts. 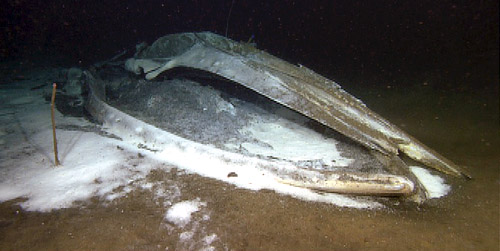 A view of the huge skull from the whale-fall site we visited today. The white areas are extensive bacterial mats.

After deploying the bone camera, we launched the ROV and quickly located the whale carcass. We did a video survey of the skeleton and surrounding area to characterize the animals. A portion of this video will help scientists create a photo mosaic of the whale carcass site. We often do this to define biological or geological features on the seafloor that are too large to capture in a single camera view. The ROV traverses slowly over the carcass in long transect lines so that the video images overlap. Back on shore, we can “stitch” these images together using a MatLab script written by Woods Hole Oceanographic Institution scientist Hanu Singh. MBARI research technician Lonny Lundsten used this method to assemble this photo mosaic for a whale carcass sunk in 2002. 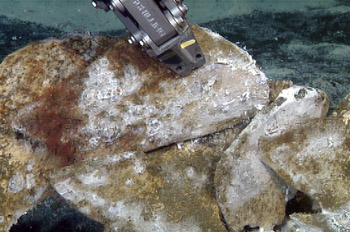 The ROV manipulator arm collects a piece of bone with Osedax worms. 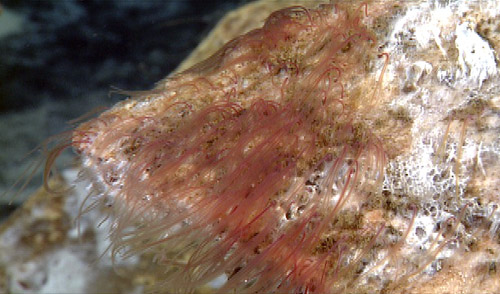 A close-up of the bone with a large number of red Osedax worms extending from it.

After documenting the site and animals on video, we began collections for scientists. The target species were worms, snails, sea cucumbers, bacterial mats, and bones with Osedax worms that Scripps scientists will keep alive in our seawater lab on board the ship. Animals were photographed in the lab and frozen for DNA analysis, and many were archived for taxonomic studies. We continue to find new species at these deep-sea whale-fall sites where nutrients are rich and food plentiful—a rare occurrence for the animals that inhabit the deep sea. 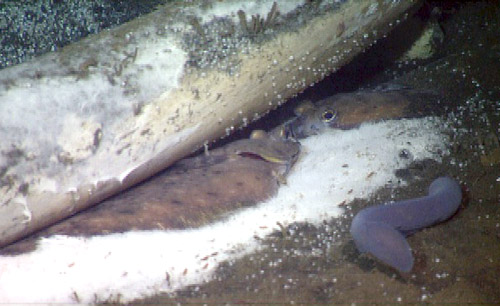 Two flatfish hide beneath the jaw bone of the whale carcass. The dark gray fish is a hagfish, also known as a slime eel—we saw a number of these fish in and around the whale-fall site. They are masters at scavenging in the deep sea.