Our last foray to the seafloor

This afternoon, we are due into the Scripps Marine Facility dock at 4:00 p.m. We did a morning dive at the San Diego Seep site, which is 42 kilometers (26 miles) due west of La Jolla. The potent fluids and gases seeping there create bacterial mats and chemosynthetic communities, and it made for a convenient last dive for this expedition. Victoria Orphan’s group collected push cores with chemosynthetic clams, bacterial mats, and even some interesting smaller fauna that we are curious to look at in the lab. We conducted laser Raman measurements in clam beds and confirmed that the animal and microbe patterns on the seafloor precisely reflected the underlying chemistry only a few centimeters down.

Afterwards, we dug around in some areas where methane signals were found, and saw floating upwards small pieces of gas hydrate, formed where methane bubbles had been trapped under a rock. Gas hydrates are naturally occurring crystalline forms in which the gases are held in a cage-like structure of water molecules that form at high pressure and low temperatures on or beneath the seafloor. Methane bubbles have been reported for this site, and at a depth of 1,000 meters (3,300 feet) and four degrees Celsius (40 degrees Fahrenheit) it is inevitable that these solid crystals would form. 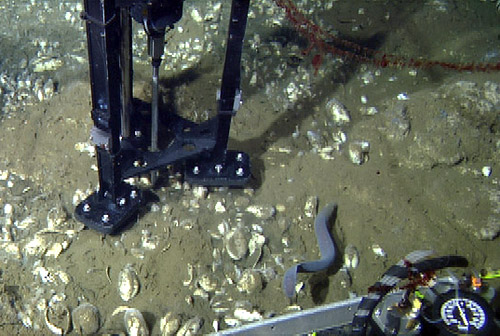 The Raman measures the pore-water chemistry in the middle of a patch of clams. In the lower right, you can see the pressure gauge which we use to see that the water pump is working (pumping pore water up to the Raman probe).

Victoria also collected a large carbonate rock. She will look for microbes living on the carbonate. These microbes oxidize methane with sulfate, which leads to the precipitation of carbonate. 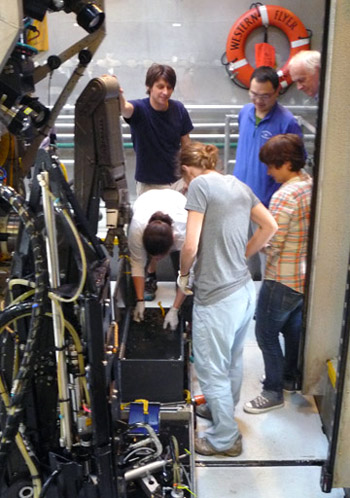 The science team looks on as the carbonate rock releases gas caught in pockets of the rock. 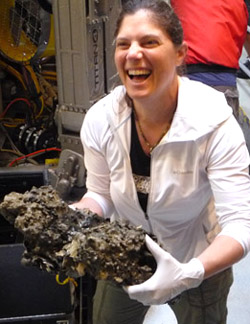 Victoria holds her prize rock! The site had carbonate beneath much of the sediment, which made collecting push cores difficult. As Victoria says, “When life give you rocks, sample them.”

Peter Brewer feels that this expedition was a great success. Part scouting mission and part sampling, we covered many sites never before seen with an ROV. He was delighted to have Xin Zhang along, crunching numbers each day when we collected more Raman spectra. He was also very happy to have Victoria and her team as collaborators on this cruise saying, “She is an excellent scientist and she is a pleasure to work with.”

From Peter Brewer:
It would have been hard to have packed more in to these 10 days at sea: new sites explored—some rich and some poor—equipment that worked perfectly, puzzles solved, and some new ones arising. This area, too, provided for us a look at what the future of the deep waters of Monterey Bay might look like as the ocean warms and its chemistry inevitably changes. 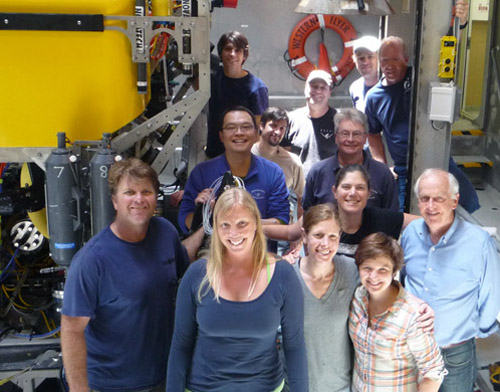 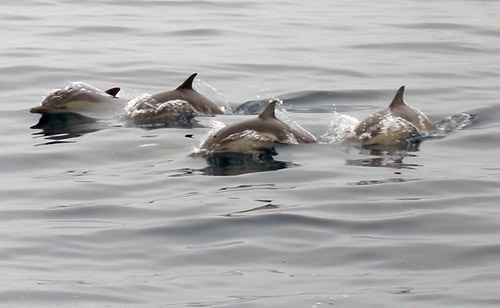 What expedition blog is complete without an obligatory photo of charismatic megafauna? Victoria captured this photo of four common dolphins surfacing off the bow.