Good things come to those that wait

Today we went back to the alternate Santa Monica Canyon Mound site. This site had a large clam field with bacterial mats as well (see day five). 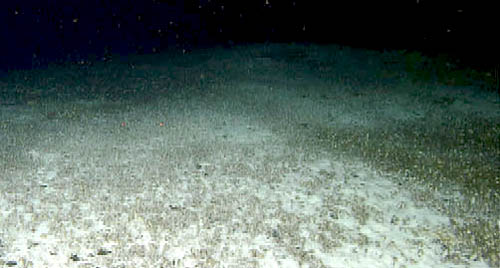 This site had large clam fields and white bacterial mat covering the clams in some areas.

We spent all day conducting transects across the mound acquiring Raman pore-water spectra at multiple depths below the sediment surface. It takes a long time to make the measurements with the Raman for each site and each depth because it has to suck the pore water up to the probe before acquiring the spectra. Peter Brewer provided the perfect quote to describe this process:

Garlic and sapphires in the mud clot the bedded axle tree.

In other words, organic mud and minerals get stuck in the axle-like Raman probe. All of this sitting around and waiting leads to many control room conversations (some very serious, some not), the occasional scientist or pilot caught on camera asleep, and, most importantly, some really cool data! Today’s sampling went very well and Peter Brewer was quite happy with the results (there was even a little dancing). The site was unusual in that very high sulfide concentrations were found, but these were not accompanied by any observable methane—a marked contrast to the mound located only a few miles away. Also, the highest levels were recorded at the bottom of the hill, not at the top as with other sites. It seems that as this mound is slowly being pushed into the California land mass, it is being squeezed and deformed so that the fluids are expressed at the bottom of the scarp—quite different from the mound “chimneys” sitting isolated in the basin.

Victoria Orphan’s group also collected push cores and peepers, which will keep them busy into the night. 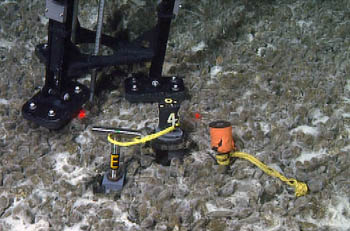 The laser Raman system, push cores, and peepers all deployed at the same site to get a full picture of the chemistry and microbial community here. 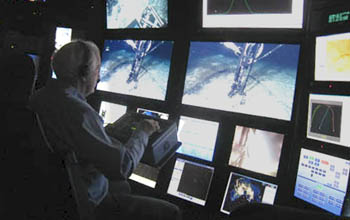 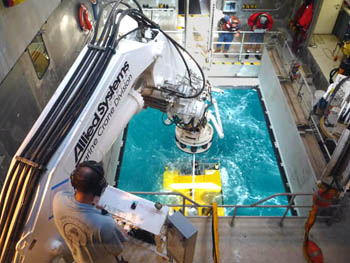 The view of Doc Ricketts recovery from a window on the second deck. Lower left, Erik Larson controls the crane, in the far right, Knute and Marko watch as the ROV comes into their view. 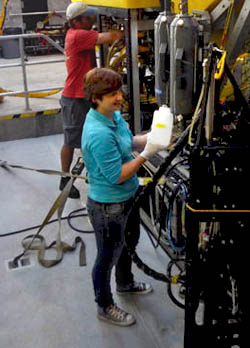 Kat retrieves water from the Niskin bottle after the dive. Victoria’s group will filter this water to look for methane-oxidizing microbes that live in the water column. Marko works on the Ricketts in the background. 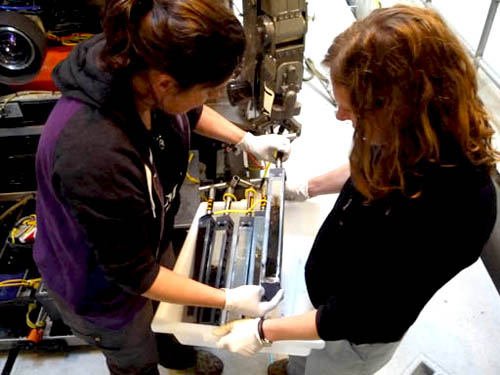 Victoria and Ally Pasulka retrieve the peepers from the ROV bio box. The ones that are darkened show that the silver emulsion paper reacted with sulfide. 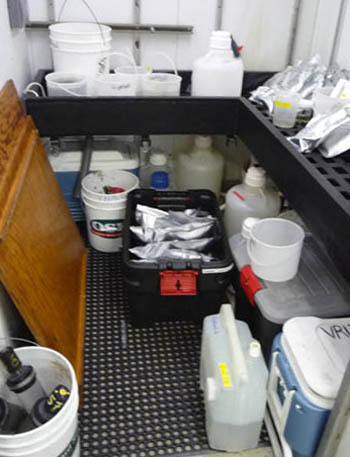 The cold room in the wet lab full of neatly organized samples. 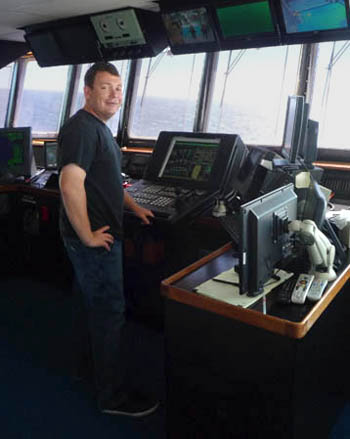 This was Andrew McKee’s first cruise as captain. Thanks to Andrew and congratulations on a successful first cruise!

After nine days at sea, we are all looking forward to going home, but we are happy about how much we accomplished on this cruise. This is the last full dive day of the cruise. We will have a short dive tomorrow near San Diego and will arrive at Scripps Marine Facility dock by 4:00 p.m.