The sites south towards San Diego left much to be desired in the chemistry department, therefore, Peter Brewer decided that we should head back to Santa Monica Basin. There was still one site there that had never been visited, and this area would give us the opportunity to revisit sites where we had previously confirmed fluid flow. We steamed 100 kilometers (60 miles) overnight to the site called Northwest Mound. The depth was about 800 meters (2,600 feet) and once we arrived on the seafloor, we quickly found bacterial mats and chemosynthetic clams. We started working immediately in an area covered in orange and white bacterial mats, collecting Raman spectra, push cores, and peepers. 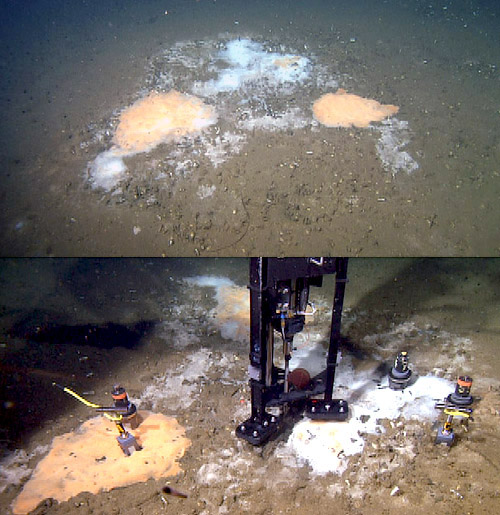 Top: An overview of the bacterial mats. Bottom: The mat area with all of the samplers deployed as the Raman measures the chemical spectra.

After spending much of the morning on this patch of mat, we began conducting a transect across this mound. By studying the chemical spectra across the mound, the Brewer group can see if the mound is acting like a chimney (i.e. the center has more methane gas flow than the outskirts). This took all afternoon to complete because each spectrum takes three minutes and it takes five to 10 minutes to flush the probe in between readings. Each time the tip is inserted deeper, another set of readings are required. 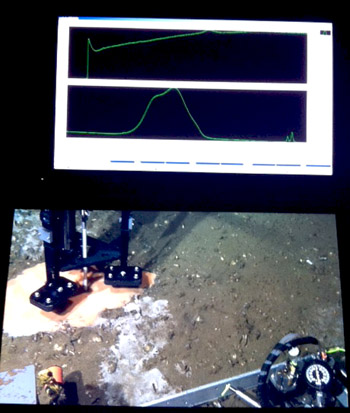 One of the Brewer lab collaborators on this expedition, Xin Zhang helped to develop the DORISS pore-water measurement system (Deep Ocean Raman In Situ Spectrometer). Xin came to MBARI in 2008 as a Ph.D. student from the Ocean University of China. While MBARI is a renowned scholarly center, it is not a degree-granting institution, so Xin was required to come as a trainee for 18 months. This meant he had to do all of the work for a Ph.D. thesis in that short amount of time. For his degree, he spent two years in China before coming to the United States, his first time leaving China. In China, he worked on a laser scanner, or LIDAR, that measured wind speed in air, but he had no background in chemistry.

At MBARI, Xin learned about Raman spectrometry and how to measure spectra of fluids in the lab with the help of Peter Brewer and engineer Bill Kirkwood. They determined that working on Raman spectrometry of pore water would be a good project for Xin’s thesis. It was widely believed that this would be impossible due to the signals being apparently highly fluorescent, and the team had not yet tackled this type of sampling and measurement. With a lot of hard work and help from the MBARI team, Xin was able to build this pore-water sampling system and test it in Monterey Bay. The published results were a big success. Xin was awarded his Ph.D. and has since been back to the United States for cruises with the Brewer group multiple times. He is now an associate researcher at the Institute of Oceanography of the Chinese Academy of Sciences in Qingdao. He plans to build a DORISS system at his institute like the one he helped to build here. He also facilitated plans for his institute to acquire a remotely operated vehicle (ROV) similar to Doc Ricketts, with the help Bill Kirkwood, as well as from MBARI operations staff, including Chief Pilot Knute Brekke. Xin is a welcome face at MBARI because his cheerful nature, skills, and work ethic make him a pleasure to work with. He will be back for Peter Brewer’s next cruise to Eel River in September. 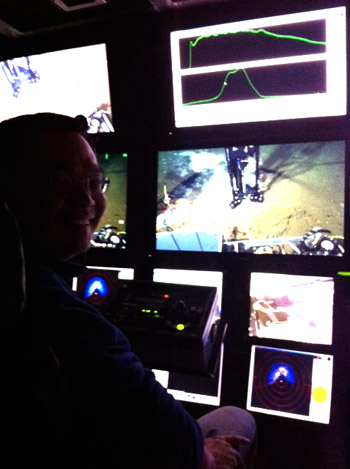 Xin at the main science camera controls as the Raman system acquires a spectra. 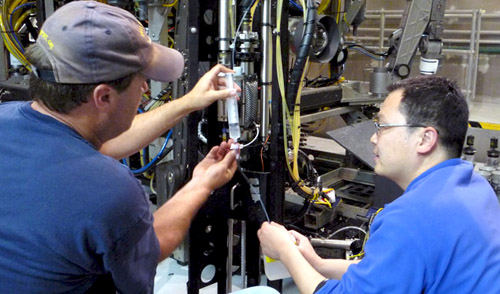 A few evenings ago, Peter Walz and Xin calibrated the Raman in anticipation of the next day’s dive. 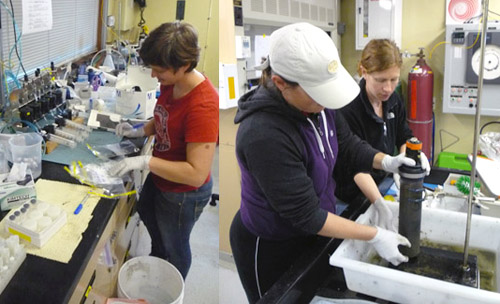 All of those push cores mean lots of work for Victoria Orphan’s lab. They slice the cores and process them for pore water and isotopic analysis. They also do molecular analysis on the microbes in the samples. Left: Kat Dawson labels whirl packs in anticipation of the sample deluge. Right: Victoria and Ally Pasulka extrude the sediment from a push core. 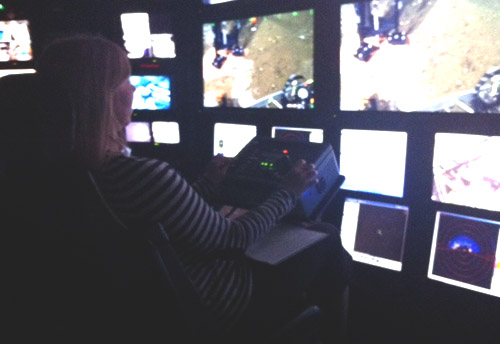 Susan von Thun at the main science camera controls. Sometimes, the chemists need a break and they let a biologist control the camera!