You can’t always get what you want

Today we conducted two half-day dives. Due west of Oceanside, California, the two sites are areas that were mapped by the autonomous underwater vehicle (AUV), but never explored with a remotely operated vehicle (ROV). The first site, Split Ridge, is a large mound with a giant gash created by Earth movement cutting through the middle. The ROV started on the west side of the ridge and climbed to the west summit with its wild jumble of broken carbonate pavement, and descended into the narrow valley between the two massive slopes on either side. We then traveled along the valley, and despite Chief Scientist Peter Brewer’s hopes, we found only carbonate rock, basaltic rock, and sediment. There were no signs of fluid flow, chemosynthetic communities, or gas venting. 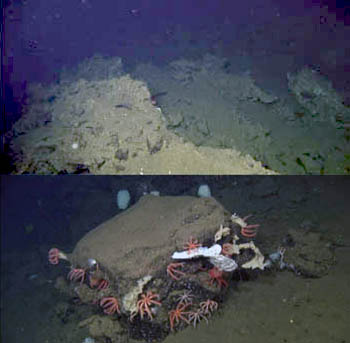 Top: At the summit of the ridge, we saw large pieces of carbonate rock. Bottom: As we descended into the valley, there were large boulders made of basaltic rock, this one, with many sponges and brisingid sea stars growing on it.

These sites, while exciting to geologists, left much to be desired for our chemists. 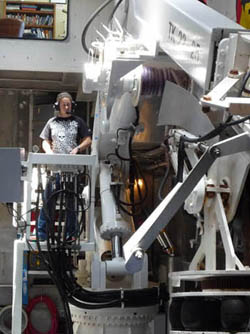 The ROV is also outfitted with Niskin bottles that can be closed at any time to collect water at discrete depths. Niskin bottles are commonly used by oceanographers to collect water for later analysis in the lab. In our case, Ed Peltzer is using this opportunity to calibrate the oxygen sensors on the ROV. He is using classic oceanography techniques to ground truth the newer technology. To do this titration, called the Winkler method, you add manganese salt, iodide and hydroxide to the water sample causing a white precipitate of Mn(OH)2 to form. This precipitate is then oxidized by the dissolved oxygen in the water sample into a brown manganese precipitate. In the next step, a strong acid is added to acidify the solution. The brown precipitate then converts the iodide ion to iodine. The amount of dissolved oxygen is directly proportional to the titration of iodine with a thiosulfate solution.

Left: Senior Research Technician Peter Walz and Senior Research Specialist Ed Peltzer (doing “old school oceanography”) perform the Winkler method on the water samples. You can see the Niskin bottle on the ROV on the left. Right: Ed holds the resulting titrations from one shallow depth (13 meters) and a deeper sample (650 meters). Can you guess which is which? (see below for answer)

The second dive, at Ridge Flank, was an isolated ridge mound south of the first site. Very quickly, we came upon small wisps of bacterial mat and a few chemosynthetic clams, indicating that there may be an interesting chemical signal in the pore water. Victoria Orphan’s group was eager to get a push core and deploy a peeper here (see previous logs for descriptions). However, we quickly determined that there must be only a thin layer of sediment on top of the rock because the push core would only penetrate a few centimeters into the sediment. 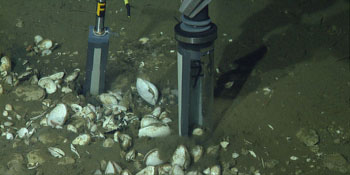 The peeper (left) and push core (right) did not penetrate deeply into the sediment at this site, indicating underlying rock.

The Brewer group was also ready and eager to use the laser Raman spectrometer. Since there was so little sediment, the probe tip could not be inserted more than a few centimeters into the sediment. The team did acquire the spectra for the pore water in the middle of a patch of clams. Dr. Brewer decided that it would be worth exploring this ridge more widely to find more signs of chemical venting. But as we made a long transect along the ridge flank, we found no other signs of chemosynthetic communities before it was time to recover the ROV just after dinner.

A reflection on Peter’s feelings about the lack of chemically interesting features at these sites during the day’s long pilgrimage across the sea floor:

and therefore is it called the Slough of Despond: for … there ariseth in his soul many fears, and doubts, and discouraging apprehensions, which all of them get together, and settle in this place; and this is the reason of the badness of this ground.

– Excerpt from the “Pilgrim’s Progess” by John Bunyan

But Brewer has high hopes for the site chosen for tomorrow.

On this second dive, Victoria did manage to collect a large rock with bacterial mat on its edge. 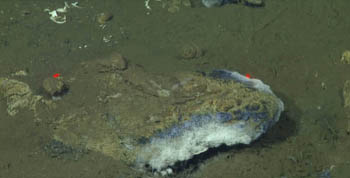 This rock’s edge has white bacterial mat growing on it. Note, this rock is large – the red dots are lasers set at 29cm apart. 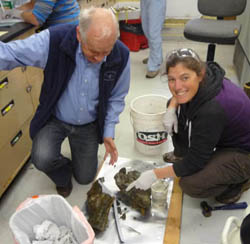 In his despondency, Peter has resorted to looking at rocks and bacteria with Victoria. 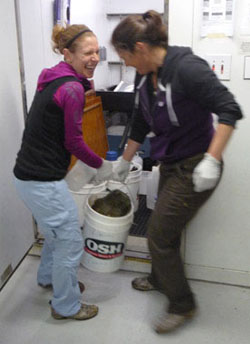 Ph.D. Student Alexis Pasulka (left) and Professor Victoria Orphan (right) carry the large rock into the cold room. I asked, “Didn’t you notice how big it was in the video?” to which she replied “Go big or go home”. I think that sums it up nicely.

Answer to Winkler method question: Water in the bottle on the left was sampled at 13 meters and is much darker than the one sampled at 650 meters because it has a much higher concentration of dissolved oxygen that has released the colored iodine reagent.