Every evening, Chief Scientist Peter Brewer is faced with a decision—what will our mission be for tomorrow? Of course, a cruise plan was made many weeks ago, but when it comes to research expeditions, plans often change. In preparation of the cruise, Peter and Ed Peltzer studied the maps made by the autonomous underwater vehicle (AUV) to decide which targets would be worth visiting. On an expedition, as many factors affect our missions, such as weather or equipment issues, changes are made to the schedule. Last night, Peter decided that since we fit two dive sites into one day yesterday, we would have time to explore Santa Cruz Basin once again, before we head south to visit new targets. 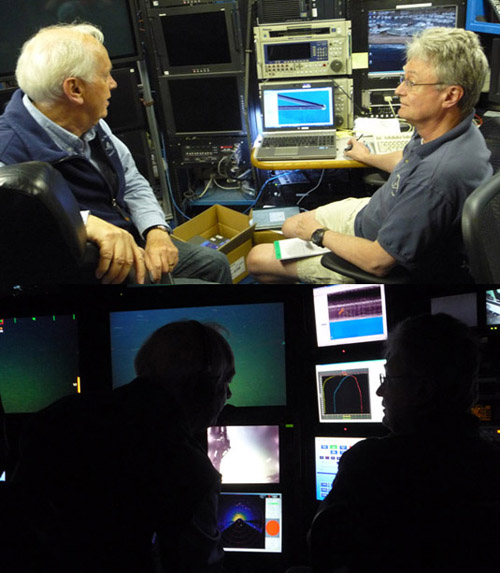 In the top image, Peter (left) and Ed (right) discuss the area to be explored the next morning, using ArcGIS to view and manipulate the maps. Below: During the dive, Peter (at the main science camera controls) and Ed (at the GIS and annotation station) discuss where to direct the pilots to fly the remotely operated vehicle (ROV) next.

The entire day was spent exploring the basin, at a depth of 1,900 meters (6,200 feet), where many hard targets on the map would be worth verifying on video. As described in the second day’s log, we observed many bioherms—mounds made up mostly by invertebrates growing on dead invertebrates, in this case sponges. 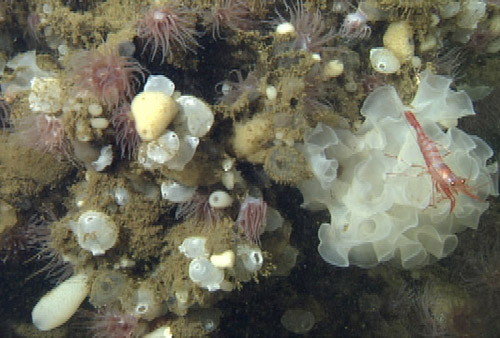 This close up of one of the bioherms, shows a variety of sponges, anemones (the purple tentacles belong to Actinernus sp.), tunicates, and a small shrimp (Pandalopsis sp.). 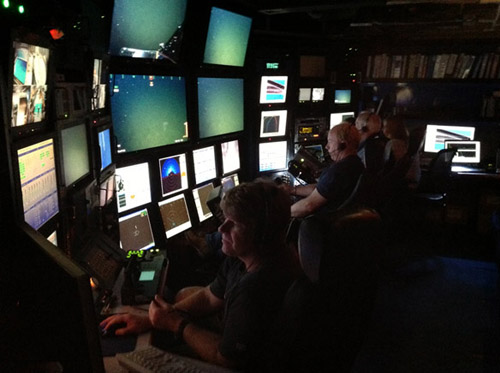 The scene in the control room during today’s dive. From front to back: Randy Prickett, Knute Brekke, Peter Brewer, Susan von Thun.

We also came across a few dead carcasses, including this dead fish. A swarm of amphipods was devouring the carcass. Amphipods are small crustaceans that can live on the seafloor and devour any dead animal that is unlucky enough to land there. 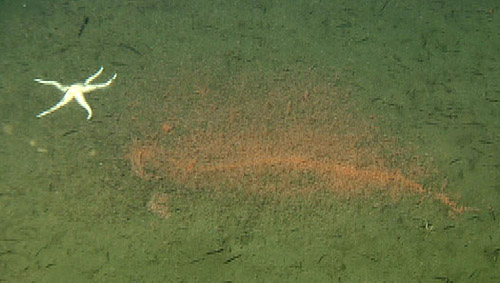 Here, you see a feeding frenzy on a dead fish. The orange dots are amphipods devouring the carcass. The areas where the amphipods are densest form the outline of what is left, merely the skeleton.

The crew of the Western Flyer is critical to the success of our mission. The engineers keep everything working, from the engine rooms to the air-handling systems. They even try to fix the air handling when we complain about the lab being too hot (thanks guys!) When we have problems with the computer network, Dan Chamberlain is always there to help. These men work hard to keep everything working and we can’t thank them enough. 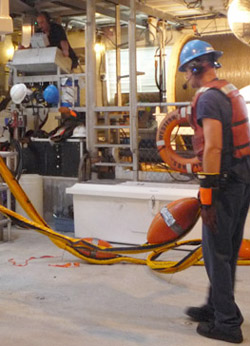 The captain and mates keep us on course—literally and figuratively. They sail the ship, each one having a four-hour shift “on watch” on the bridge twice a day. During ROV dives, they work closely with the ROV pilots to make sure that the tether isn’t pulling on the ROV so we can effectively achieve our science goals. 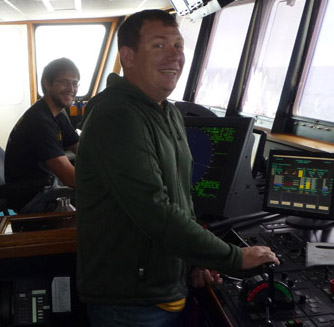 There are always two people on watch on the bridge. Captain Andrew McKee (at the controls in the forefront) and engineer Fred Peemoeller (in back).

Where would we be without our cook? Patrick Mitts cooks three meals a day for up to 25 people who have a variety of dietary needs, from omnivore to vegan. It is very rare on research vessels to have a cook who accommodates dietary restrictions. His meals always have something for everyone. He keeps us well fed—perhaps too well! 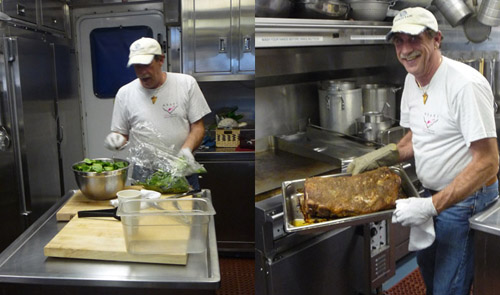