There and back again

Much of this expedition has entailed exploring new areas of the seafloor. The high-resolution maps made by the mapping autonomous underwater vehicle (AUV) give the scientists a good idea of sites that may be of interest to chemists, geologist, and biologists—but we never really know what we’re going to find until we get there. Today we started the day out at yet another new site. This site was another elongated mound with peaks and craters—features that look promising for chemists looking for gas venting from the seafloor. We started our survey of the area at the largest peak, which at the summit revealed a large pit surrounded by massive slabs of broken carbonate rock. On the slope of the second peak, we found a crack under a slab of carbonate with stringy, white bacteria growing along its edge. We used a temperature probe to see if there was any warm water venting, but alas, there was not and the small fronds of bacteria were soaking up the tiny quantities of dissolved sulfide that must have been emanating below. We were seeing the faint remnants of what was once a potent fluid. 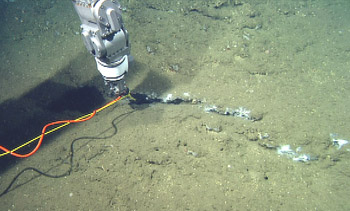 The remotely operated vehicle (ROV) manipulator inserts a temperature probe into a crevasse in the carbonate rock to see if there is an increased temperature, which would indicate gas venting.

We traversed the mound to the east and started seeing dead clam shells, then more shells, huge swaths of white bacterial mat, then live clams, and finally a huge clam field! These chemosynthetic clams have sulfur-oxidizing symbiotic bacteria from which they derive much of their nutrition. The biologists, led by Bob Vrijenhoek, who will participate on the next leg of this expedition are very interested in sites like this and were indeed excited to hear, via email, about this new clam field. Peter Brewer decided to be content with discovering this site and that our time this afternoon would be better spent using the laser Raman system at our previous site in the Santa Monica mounds. Back we went to the acres of bacterial mats atop a distinctive hill. 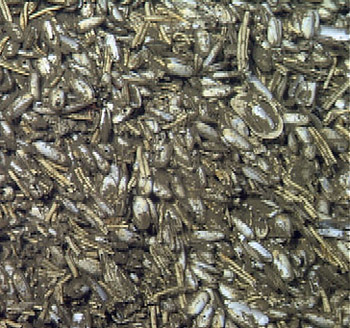 The site contained a large clam field. These clams, Ectenagena elongata, are chemosynthetic. They derive much of their nutrition from the symbiotic sulfur-oxidizing bacteria in their gut.

The afternoon was spent taking detailed laser Raman measurements of the pore water at five sites across the Santa Monica southwest mound. Victoria Orphan also took samples using the modified peepers and push cores at each site (for more on those samplers, read yesterday’s blog). The chemistry team and the microbiological team have much in common and their data complement each other. On the map the dome looks to be blistering from the flat seafloor. This dome acts like a chimney and the bacteria indicate where the gas-rich fluids are coming out. As expected, the methane concentration was low at the edge of the bacterial mats and highest at the top of the dome. This detailed sampling of the mound will give both the Brewer group and the Orphan group a picture of the total amount of highly reducing fluids (containing methane and sulfide) that are supporting the vast carpets of bacteria. In the future, as the ocean warms and carbon dioxide in the seawater increases, more oxygen will be consumed by chemical reactions in seawater. It is possible that areas like these will become a more commonplace sight in the deep sea. 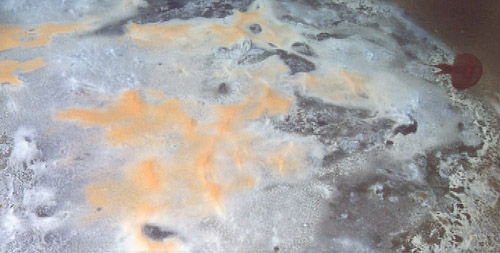 Dense white and orange bacterial mats dominate this landscape. Occasionally large red jellies (Poralia rufescens) drift by, but there is little else in the way of life. 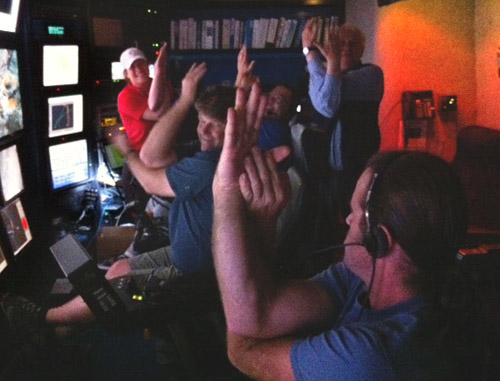 To relax our contorted mental faculties, we resort to physical contortion. Yoga can be done anywhere!