Today we explored another new site based on the maps generated from the autonomous underwater vehicle (AUV) expedition on the Rachel Carson in March. This site was an elongated elevation with two distinctive peaks on the map, but we didn’t know if there would be any active venting here. When the remotely operated vehicle (ROV) approached the seafloor, we saw large slabs of calcium carbonate rock but very little sediment useful for the Raman spectrometer probe of the Brewer group. Calcium carbonate forms when organic material decomposes in the sediments and carbon dioxide builds up, causing the alkalinity to rise. The presence of carbonate is an indication that, in ancient times, this site had active venting where methane fueled a thriving chemosynthetic community. Today, however, this site hosts a community of normal animals found at this depth. We saw many sea urchins, rockfish, hake, sponges, and sea pens. 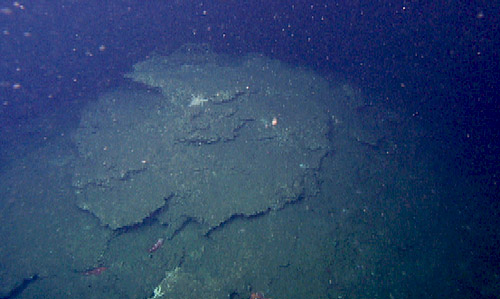 This mound is made of calcium carbonate, which indicates that this was an active venting site in ancient times. 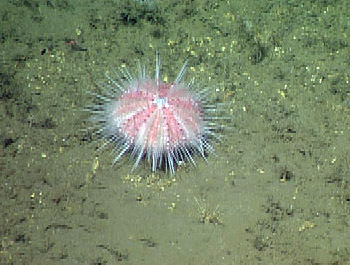 This fragile urchin, Strongylocentrotus fragilis, was the most common animal seen living on the seafloor at this site.

We surveyed this entire mound and found no active venting; it had long ago shed its chemical energy. We decided to recover the ROV and move to another dive site more interesting to the geochemists and microbiologists on board. We had just enough time to go back to yesterday’s site where we left samplers for Victoria Orphan, and happily we were able to land right on the site marker quickly and retrieve the samplers before dark.

As mentioned in a previous blog, Victoria and her collaborators are using a new technique to analyze the sulfide stable-isotope signature in deep-sea sediment colonized by sulfide-oxidizing microbial mats. She modified a “peeper” with a strip of silvered polymer. The sulfide in the seafloor will react with the silver to yield a blackened zone. The peeper penetrates the sediment to 40 centimeters. It was the perfect tool on which to test this method, because she would like to know how the availability and use of sulfur changes with microbes living deeper in the sediment. Victoria also added this film to a few push cores to see if this technique will work while sampling the sediment for microbes. She can analyze the film using an ion microprobe (secondary ion mass spectrometer) to create spatial maps of sulfide within the mat and underlying sediment. She can see on the micron-scale the conversion of sulfur by the microbial community. Victoria’s work using geochemical tools to learn about sulfur metabolism in microbial communities is funded by the Gordon and Betty Moore Foundation. 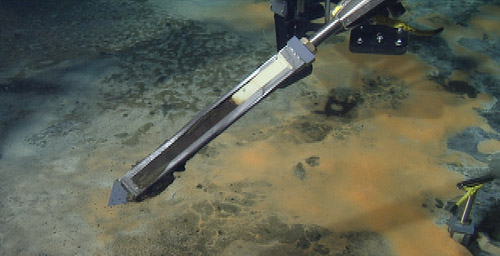 The ROV manipulator holds the peeper so we can get a frame grab of the silver film. The blackened part is where the sulfide in the sediment pore water has reacted with the silver emulsion. 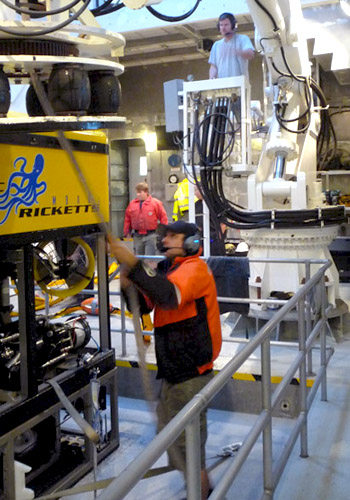