Last night, Peter Walz and the remotely operated vehicle (ROV) pilots spent a few hours prepping the ROV for the dive today. The laser Raman was mounted on a tripod that will allow the pilots to more easily deploy the Raman probe for long periods while the scientists acquire measurements. Early this morning, they secured the Raman tripod to the vehicle. 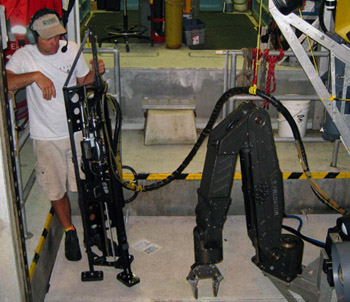 ROV pilot Mark Talkovic testing the Raman hose management to ensure that the manipulator can deploy the tripod without the hose getting entangled on ROV hardware.

Today’s dive site was in Santa Monica Basin within sight of the coast. It’s an interesting one that was discovered in 2010, when autonomous underwater vehicle (AUV) maps produced by an MBARI team showed distinctive mounds with summits at about 850 meters (2,800 feet) deep in this area. Later in 2010 on the Western Flyer, the Brewer group had the serendipitous opportunity to come here when the weather at a planned site further offshore was too bad to dive the ROV. This dive site was at first considered too risky since it sits right in the middle of the shipping lane leading in to the ports of Long Beach and Los Angeles—the equivalent of working in the middle of an interstate highway, but with giant ships passing almost too close by the Western Flyer. They had no idea what to expect and they were amazed by what they found.

This site truly is a dream come true for deep-sea chemists and microbiologists. The large mound is covered in acres of ghostly undisturbed bacterial mat. The huge swaths of white bacterial mat and occasional patches of bright yellow/orange make the seafloor look otherworldly. Besides the occasional deep-sea jellyfish drifting by, there is no sign of any other marine life. This area is very low in oxygen, making conditions here inhospitable to most marine life. Understanding the biology and chemistry of such “dead zones” will give scientists insight into how the deep sea may change as the ocean warms, CO2 increases, and low-oxygen zones expand in the future. It’s possible that other mounds that now host fish populations will become more like this one as the deep sea changes. 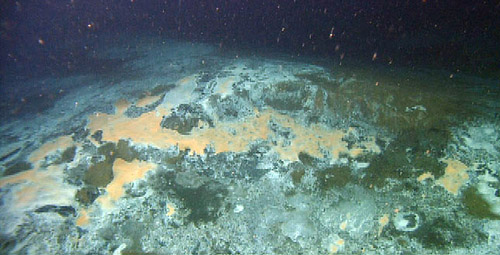 This large mound is covered in bacterial mats, devoid of other marine life.

We spent some time surveying the entire mound to map the extent of bacterial mat, however, much of the day was spent taking laser Raman measurements at different areas on the mound. As I mentioned in the blog yesterday, the laser Raman spectrometer can analyze the chemical composition of any target of interest—be it liquid, solid, or gas. At this site, the Brewer lab is interested in getting measurements of the chemical composition of the pore water—the water seeping through the sediment. The Earth’s crust has weak points that allow gases to push through the crust towards the surface. This process can create mounds such as this one. The laser Raman can incrementally measure pore-water chemistry all the way to 40 centimeters below the sediment surface. The dissolved gas concentrations are so high that if a core is taken and brought back to the surface, much of the original signal is lost as the gases expand. The laser techniques allow accurate measurement at depth.

Chemicals present in the pore water (such as methane, oxygen, carbon dioxide, and sulfide) are used by bacteria in chemical reactions to obtain energy. Victoria Orphan’s group is interested in understanding how specific bacteria use the chemicals present in the sediment. The interdisciplinary collaboration between these chemists and microbiologists will help them answer questions about chemical pathways in the deep seafloor and how microbial communities thrive in certain environments. 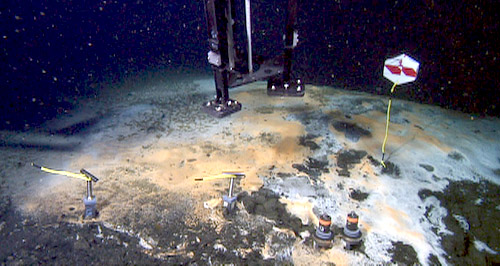 Here you can see the dense white and yellow/orange bacterial mats, two push cores (lower right), two peepers (lower left), and a site marker (upper right). The ROV manipulator is holding the laser Raman tripod in the center. We will return to this site in two days to recover the peepers and modified push cores. 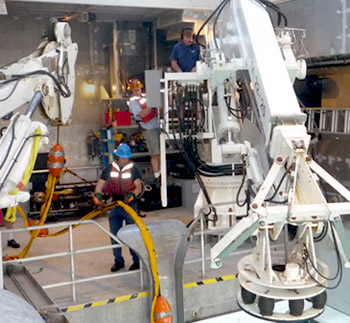 As ROV Doc Ricketts is brought on board at the end of the dive, most of the crew are on deck as part of the recovery. Chief Engineer Matt Noyes (left) pulls the tether aboard, ROV pilot Randy Prickett (right) trains the new Chief Mate Erik Larson (middle) on crane operations. 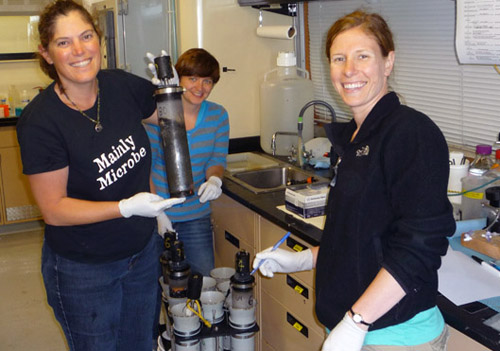