The ship steamed all day yesterday and overnight along the coast. The weather improved immensely and we were greeted by sight of the Channel Islands this morning. We cruised between Santa Rosa Island and Santa Cruz Island to get to our dive site in Santa Cruz Basin. 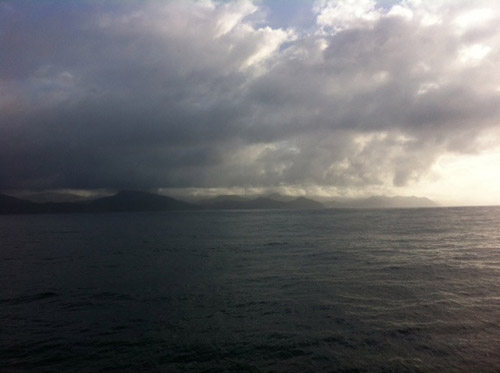 The sun was shining and the seas were calm as we cruised by Santa Cruz Island, part of the Channel Islands National Park.

The depth in this basin is about 2,000 meters. We explored the seafloor, coming across many small patches of marine life, known as bioherms. These bioherms (mound-like forms built by a variety of marine invertebrates) were covered in sponges, tunicates, gastropods, brachiopods, and sea anemones. 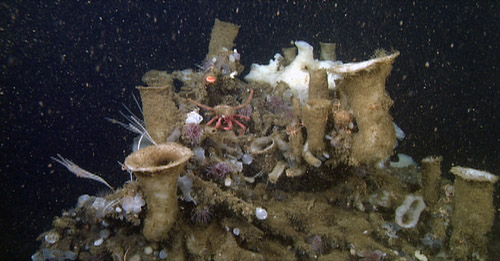 This bioherm is a mound formed by invertebrates that live on the seafloor building a reef for other marine organisms to colonize. Here you can see sponges, brachiopods, and even a crab.

On this dive, we tested some of the equipment that will be used tomorrow at a site with active gas vents and extensive bacterial mats. Today, we found a small patch of bacterial mat, which was a perfect place to test the equipment. The laser Raman spectrometer bounces a laser beam off of the target of interest, providing information about that object’s chemical composition and molecular structure. The laser Raman spectrometer has recently been modified to look at pore-water fluids of sediment. This is a much better method for studying the chemistry of the pore-water fluids than collecting a push core, which requires bringing the sediments to the surface, squeezing out the pore water and then analyzing the chemistry. To test that the Raman system was working, the remotely operated vehicle (ROV) manipulator was used to insert the laser into the bacterial mat and measure the chemical spectra at different depths in the sediment. These tests were successful and Peter Brewer is looking forward to using it tomorrow.

Victoria Orphan and her group also tested a modified “peeper”. A peeper is a pore-water equilibrator that allows the water in the sediment to seep through a membrane. The pore water is stored in a buffer inside the peeper and can later be analyzed for its chemical composition. Victoria modified this peeper with a strip of silvered polymer in which the sulfide in the sea floor will react with the silver to yield a blackened zone. That can be scanned to get a snap shot of the sulfide in the pore water. She will do isotopic analysis to answer questions about how the microbial community is using sulfide in the sediment. She can also compare those results with the laser Raman spectra, which were measured at the same site and can resolve the main forms of sulfide present. Finally, she can compare these results with traditional pore-water analysis in the lab, by squeezing the water out of the sediment collected with a push core. 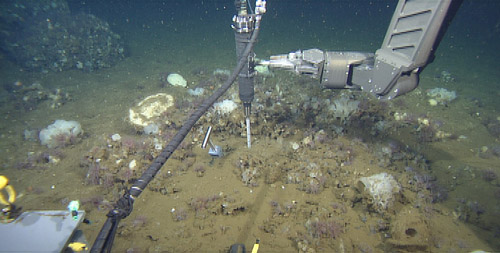 The ROV manipulator holds the laser Raman tip into the sediment where we found small patch of bacterial mat. To the left of the laser, you see the metal T-handle of the “peeper”, which was left in the sediment for over 30 minutes.

Tomorrow, we will dive in Santa Monica Basin where there are active gas vents and extensive bacterial mats—a dream site for chemists and microbiologists! 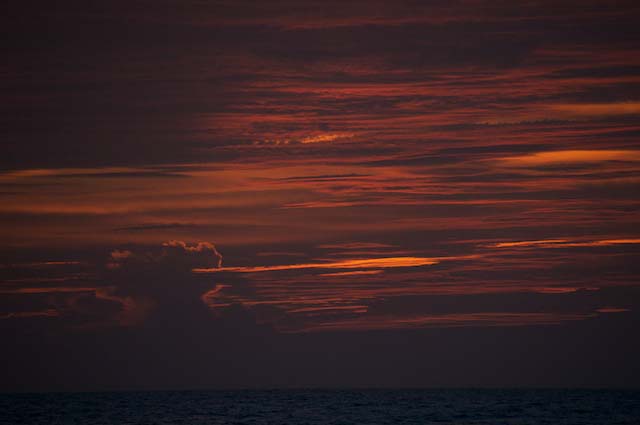