Today, we left the dock at 0700 to make our transit to Southern California. Although the weather was beautiful in Monterey Bay, as we turned south, we steamed head-on into high winds (well over 30 knots) that were expected to persist all day. This means that our transit will take a little longer than we had hoped, but we should still get to our first dive site by mid-day tomorrow in time to get in a short dive with our remotely operated vehicle (ROV) Doc Ricketts.

We are transiting within sight of the coast to Southern California. Here, you can see the Big Sur coastline and the significant wind waves.

As is often the first order of business on a research cruise, we had a boat and fire drill. The second mate, Miriam Anthony, described the safety procedures on the ship to the science team. Two of our team members also donned their immersion suits, which would be required for all crew and science members in the event that we have to abandon ship. 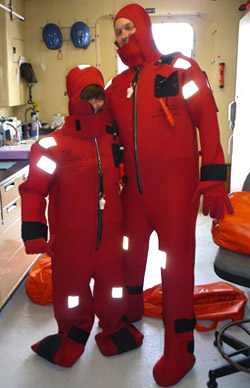 Kat Dawson (left) and Peter Walz (right) wearing their immersion suits, which not only provide flotation, but keep you warm in an emergency.

This day of transit will give the science team a chance to make sure everything is ready for the dive tomorrow. 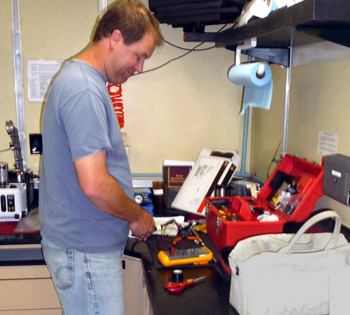 Peter Walz checks the voltage of a battery before attaching it to an instrument on the ROV.

In March, MBARI’s mapping autonomous underwater vehicle (AUV) surveyed areas of interest in Southern California. Peter Brewer and Ed Peltzer have identified target sites where extreme chemical conditions are likely to exist based on the high-resolution maps produced by the earlier AUV expedition carried out with R/V Rachel Carson. 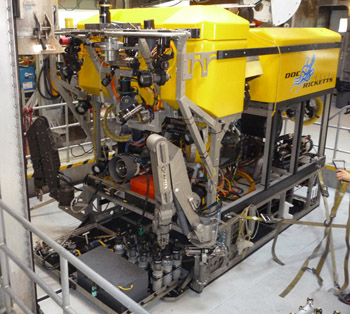 We will use ROV Doc Ricketts to study sites on the seafloor that are venting gases.