February 11: Steaming to the Bahamas

We began the 40-hour journey toward the Bahamas late last night and will arrive early tomorrow morning, one day ahead of schedule. The science group worked throughout the day to clear out the lab area and pack equipment. They completed detailed inventory lists of every box, bag, and container then checked and re-checked each list against the contents. All of the scientific samples and much of the gear were prepared for direct shipment to MBARI, requiring even more forms and attention to detail. 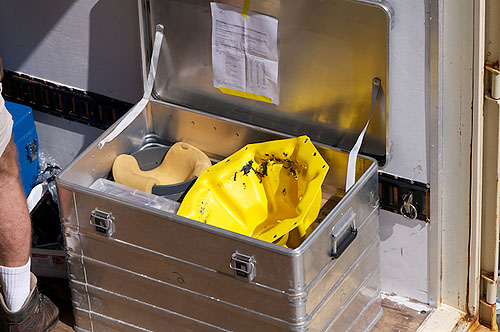 Parts of the damaged strobe light housing were packed for shipment back to MBARI. Each shipping container contains detailed inventory lists for international customs regulations.

The KAI team also had the formidable task of disassembling the kite deck and corralling gear and cameras into suitcases. By late afternoon a mound of oversized black duffel bags and hard-sided cases were gathered under the aft deck awning. 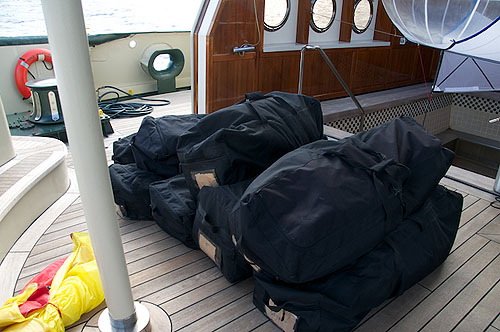 Bags containing KAI gear were packed and assembled on the aft deck. The kytoon remains on stand-by for the possibility of one last deployment as we transit into the Bahamas.

The weather turned wet and blustery with periods of showers throughout the day. As the ship neared shallower waters around the Bahamian islands, the officers on the bridge became extra vigilant, monitoring sea charts and ship traffic. 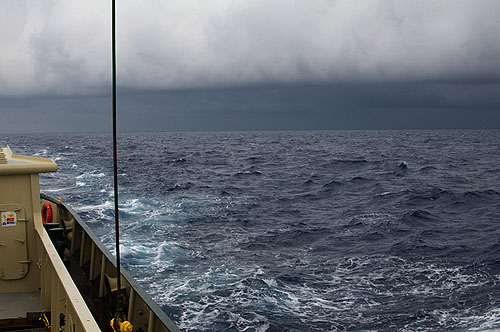 The horizon darkened with storm clouds during our transit toward the Bahamas. Blustery winds and rain occurred on and off throughout the day and into the night. 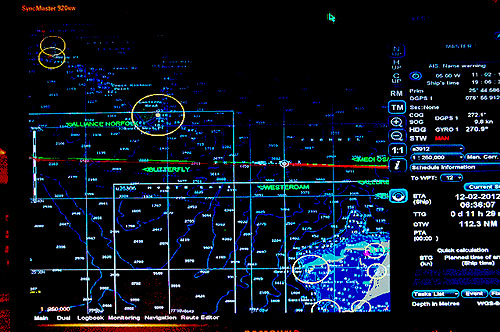 Navigation computers on the bridge show vessel traffic as the Lone Ranger nears the Bahamas.

After our days of isolation in the middle of the Sargasso Sea, it was a dramatic change to see so many other ships. Colorful lights on massive cruise ships looked like jewels floating on the water. 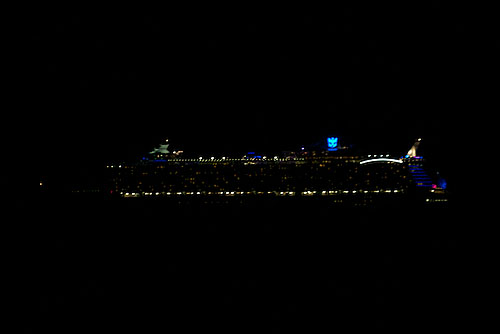 In the inky blackness of night, nearby cruise ships look like jewels on the water with their colorful lights.

We ended the evening with our last seminar-at-sea to recap the expedition. We viewed highlights from the deep-sea observatory images, KAI’s aerial and underwater photography platforms, and a slideshow showing our activities over the past two weeks. These summaries showed how much was accomplished during our time at sea. 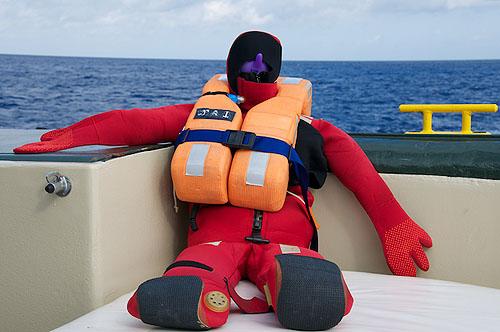 The captain uses transit time for crew training and drills. The crew practices rescue procedures during man overboard drills with this floatable figure.