The Sargasso Sea expedition is using remote sensing at multiple scales to help understand Sargassum dynamics. These multiple perspectives allow the scientists to quantitatively evaluate the distribution and patchiness of Sargassum, and to place their observations in a greater context. 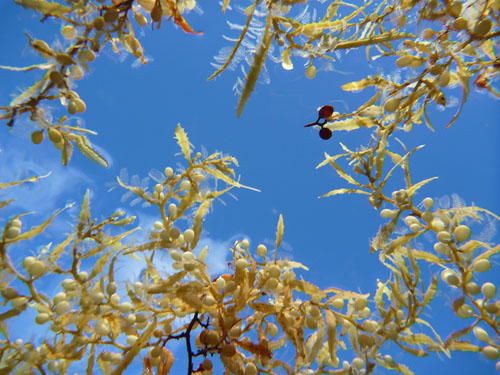 Delicate fronds of Sargassum appear to be suspended in air in the clear blue waters of the Sargasso Sea. Photo: Debbie Nail Meyer

As the Lone Ranger travels through the Sargasso Sea, shore-based collaborators are providing the larger scale views from instruments onboard satellites that orbit the Earth. Alana Sherman has had daily emails with John Ryan at MBARI and a research team at the Institute of Ocean Sciences, Fisheries, and Oceans Canada (IOS) to get up-to-date satellite data for our locations. 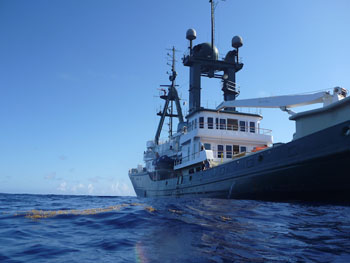 A view of the Lone Ranger from the ocean during snorkeling observations. Photo: Debbie Nail Meyer

The KAI kite-borne camera systems capture the smallest spatial scale and highest spatial resolution. The kite platforms also give size perspective when the ship is in the image view.

These remote sensing data are assisting us on the ship and in turn, our in situ collections and observations are valuable to John and the IOS researchers for calibrating their algorithms. 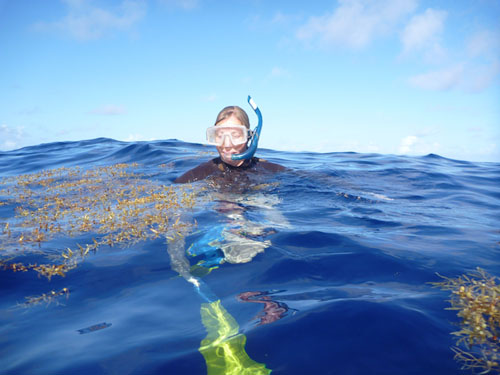 The clear blue skies today seemed ideal remote sensing conditions. During the morning we surveyed the area for Sargassum windrows, searching for the enormous rafts we had encountered just a few days before. But winds and waves had scattered the large aggregations. Fortunately we found some smaller patches and had the opportunity to snorkel in the Sargasso Sea. It was amazing to dive beneath and view the vibrant yellow-brown fronds through such transparent waters.