In addition to recording animal life, the time-lapse camera on the Sargasso deep-sea observatory has provided a window into physical dynamics on the seafloor. In each of the previous deployments, the camera system has returned images of sediment storms caused by deep-sea currents. These episodic events are surprising given the depth of the observatory’s location and its distance from the continental margin. 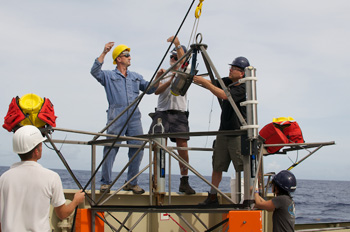 The heavy titanium housing containing the time-lapse camera system is lifted by crane into position and secured on the observatory frame. Photo: Debbie Nail Meyer

To get more information about these dynamics, researchers have added an acoustic Doppler current meter to the observatory for this deployment. The current meter is a completely self-contained instrument with its own battery and data-logging device inside a pressure-rated titanium housing. The instrument has been programmed to record current speed and direction every 15 minutes for the next six months. 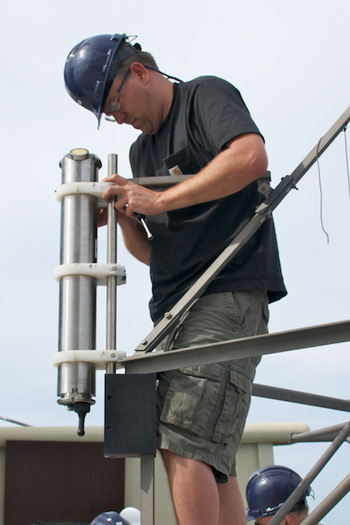 Michael Risi mounts an acoustic Doppler current meter to the frame of the Sargasso deep-sea observatory. The instrument will record current speed and direction data during the six-month deployment. Photo: Debbie Nail Meyer 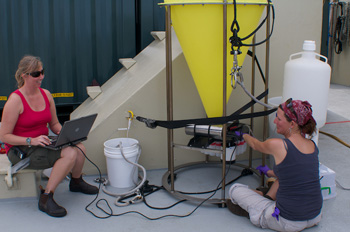 The researchers completed the preparations by mid-afternoon and operations began to hoist the observatory into the sea. The spar buoy mast was lowered off the stern of the ship first. As the Lone Ranger steamed ahead slowly, each float was sent over the edge, one at a time. Soon a line of orange blocks was trailing behind the ship. Then the first sediment trap was lifted by the crane and released. For the next hour, the process continued with lines and gear being sent into the sea. Finally, the time-lapse camera frame was hoisted up and over the side of the Lone Ranger. It slowly sank out of view, pulling the sediment traps, lines, and floats with it to the depths. The flagged mast of the buoy submerged just eleven minutes later, signaling the end of another successful deployment. 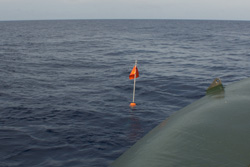 During the observatory deployment, the spar bouy mast is lowered into the water first. Photo: Debbie Nail Meyer 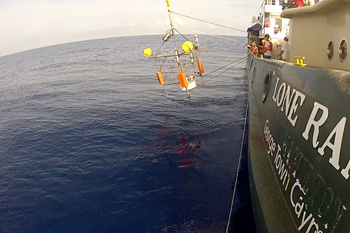 The observatory slowly sinks to the seafloor, pulling the sediment traps, floats, and spar buoy mast into the depths. Photo: Debbie Nail Meyer