Whales off the starboard bow!

We have been treated to several sightings of minke whales and a small pod of rough-toothed dolphins over the past few days as the Lone Ranger has been quietly drifting. Perhaps these marine mammals were enticed to investigate once the ship’s noisy engines were silenced. 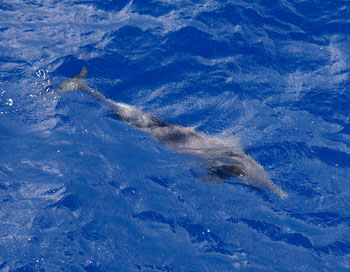 One dolphin comes close to the bow and can be seen clearly in the transparent water. Photo: Carola Buchner

The winds and waves also seemed ideal for Sargassum as we passed several large aggregations. We saw the most extensive raft today in the late afternoon, an extensive windrow with patches nearly half the size of the Lone Ranger. The KAI team quickly responded by launching a kite platform and camera system. It recorded some amazing aerial views of the giant windrow as it passed from bow to stern of the Lone Ranger. The vibrant yellow-brown seaweed raft brushed the ship on its path, tempting us to jump in with a mask and snorkel to peer under its canopy. Hopefully we’ll see similar aggregations after the deep-sea observatory is deployed. 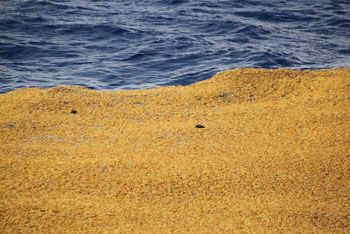 We had a close-up view from the ship of the Sargassum patch as it passed by. Photo: Debbie Nail Meyer 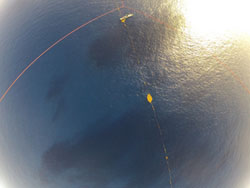 The aerial view of the Sargassum as it touches the Lone Ranger on the starboard aft quarter. Photo: KAI Institute 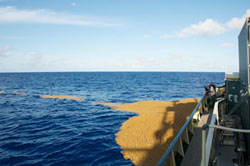 Our view of the patch from the ship when it reached the same position. Photo: Debbie Nail Meyer 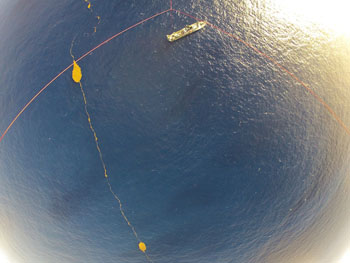 As the kite platform is reeled in, it records a closer view of the Sargassum aggregation as it drifts away from the Lone Ranger. The windrow extended on both sides of the ship. Photo: KAI Institute

But our attention today was focused on completing the long list of tasks for the observatory. Every instrument and component was cleaned, checked, and tested. Floats were arranged on the aft deck with lines coiled carefully in preparation. The anchor weight was attached to the frame and the acoustic releases were mounted. Some final steps remain for tomorrow morning and then the observatory will be launched once again into the sea. 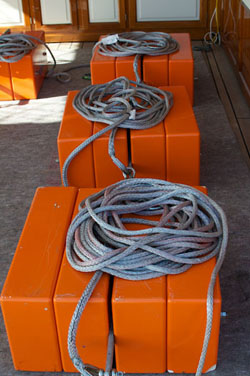 Syntactic foam floats provide the buoyancy to lift the observatory to the surface when it is released from the anchor weight. Each float weighs nearly 50 kilograms (100 pounds) in air. Photo: Debbie Nail Meyer 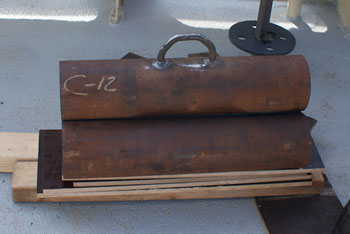