February 7: Views from the observatory

With the Sargasso deep-sea observatory safely secured on the ship, the science team began the job of processing the data and samples and servicing the instruments for another deployment.

After each of the two sediment traps were brought onto the deck, the team removed the sample bottles and temporarily stored them in the science lab refrigerator for later processing. The sediment traps are designed to collect small particles falling down from the upper waters, food that is traveling to the deep-sea ecosystem. Each trap has a carousel of bottles that have been pre-programmed to rotate every 10 days during the six-month deployment. 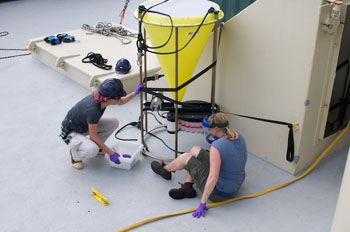 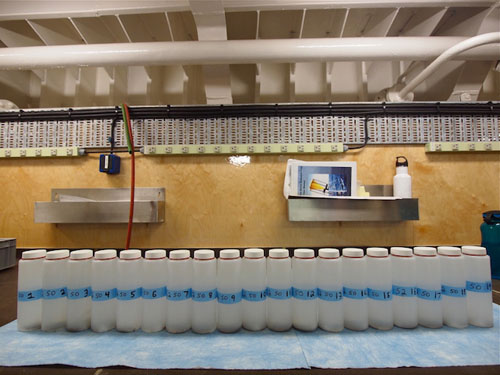 The sediment traps samples were arranged in the science lab before initial processing. These bottles all come from one sediment trap; each bottle contains 10 days’ worth of material. Note the dark layers at the base of each bottle, the particulate matter (sediment) collected by the device. Photo: Carola Buchner

There was a sense of excitement in the lab to see what would be found in the samples. Ken Smith inspected the contents of each bottle, separating out larger particles like pieces of seaweed and identifiable animal life. Some jars had bits of Sargassum while others had an amphipod or polychaete worm. One sample contained a small pteropod, a pelagic mollusk that swims with wing-like flaps; they are sometimes called “sea butterflies.” The samples were placed under the microscope for further examination and pictures of each sample were recorded. The sample bottles were then placed in a freezer where they will stay until the end of the expedition.

Left: Researchers extracted this pteropod, a swimming mollusk, from the sediment trap samples. Right: They also found this amphipod, a small shrimp-like crustacean, in the samples. Photos: Debbie Nail Meyer

For the time-lapse camera system, pictures were downloaded from the memory card and reviewed. The imploded strobe light did have an effect upon part of the image brightness, but the results are still clear enough to identify species and events on the seafloor. Susan von Thun applied her deep-sea video analysis skills to complete a first review of the images. She was able to identify a pelagic sea cucumber, cusk eel and pieces of Sargassum seaweed. The camera also documented a piece of plastic that stayed in the field of view for 12 hours before deep currents pushed it away. It’s amazing to see evidence of human activity more than five kilometers (three miles) below on the seafloor. This is a subject of special interest to Susan and her colleagues at MBARI who have been analyzing records of marine debris in the institute’s extensive deep-sea video library. 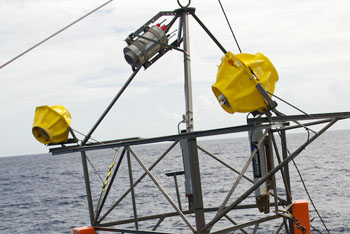 The time-lapse camera contained within a titanium cylinder is mounted at the top of the tripod frame and pointed down toward the seafloor. The system is programmed take a picture every hour. The strobe lights on either side flash simultaneously to illuminate the pitch-black seafloor.

Left: The time-lapse camera on the Sargasso Deep-Sea Observatory captured this image of a cusk eel. Right: The camera system also recorded the presence of this blue piece of plastic on the seafloor. The plastic stayed in view for 12 hours. Photos: MBARI/SOI/MSTF

As the Lone Ranger drifts along this sea of blue, my imagination is captivated by these glimpses into the depths that were made possible by the observatory.