The deep sea is cold, dark, and under tremendous pressure, yet it is the largest habitat on planet Earth and home to many kinds of life. For deep-sea scientists, much of the challenge is getting instruments into this remote habitat. The deep seafloor at five kilometers depth seems more distant than the moon, 384,000 kilometers away. The surface of the distant moon is visible with a set of binoculars, yet under the sea, visibility is limited to a few tens of meters at the most.

A central part of this Sargasso Sea expedition, the deep-sea observatory is an example of how MBARI, the Marine Science and Technology Foundation, and the Schmidt Ocean Institute are working together on technology to access, observe, and sample these extreme ocean habitats. 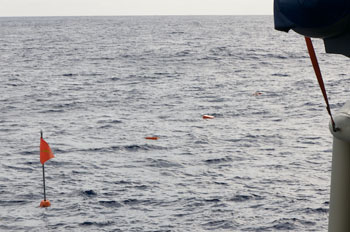 The mast of the Sargasso Sea deep-sea observatory and three floats drift on the surface after being released from the seafloor. Photo: Debbie Nail Meyer

Ken Smith and Alana Sherman deployed an observatory in the Sargasso Sea for the first time last February as part of a long-term effort to study the food supply to deep-sea ecosystems. This observatory replicates a similar system that Ken has maintained off the coast of California for the past 20 years. Data collected by the Pacific observatory have given new insights into climate patterns and carbon cycling in surface waters that are detectable on the seafloor. Surface waters of the nutrient-poor Sargasso Sea sharply contrast the productive Pacific location, providing a unique comparison in an area that is still largely unexplored.

The Sargasso Sea observatory has been located at 5,400 meters depth about 1,000 kilometers (550 nautical miles) southwest of Bermuda for the past year. Arrays of high-capacity batteries allow the observatory to operate autonomously for six months at a time. The time-lapse camera system on the observatory has been recording pictures of the seafloor every hour. Two sediment trap samplers have been collecting falling food particles in jars that rotate every 10 days. The observatory was recovered and redeployed in August 2011.

Left: One of the upper six syntactic foam floats is lifted out of the sea. Right: The top of one sediment trap of the observatory is visible just below the waterline. Photos: Debbie Nail Meyer

Today was the second time that the observatory was recovered from the deep. In a few days it will be returned for another six-month period. The recovery began early in the morning before sunrise. Alana, Ken, and Michael Risi readied an acoustic deck box and transducer to communicate with the observatory. They lowered the transducer into the water and sent an acoustic signal to the depths. When the observatory successfully responded, Alana sent a separate acoustic command to initiate the release, freeing the observatory from its anchor and allowing it to rise slowly to the surface. It took just over two hours for the leading mast of the one-kilometer-long observatory chain to reach the sea surface.

The crew used grappling hooks to snare the mast line and the long, careful process of lifting the observatory out of the water began. The operation involved using the crane and capstan to bring each component of the observatory line onto the Lone Ranger. Hours later we reached the very last part of the observatory, the camera tripod. The bright yellow spheres of the two strobe lights mounted at the top of the four-meter-high frame were the first visible parts of the tripod as it was lifted out of the water. Soon we could see evidence of the enormous pressure of the deep—540 atmospheres of pressure at this depth—as one strobe housing was deformed by holes and pulverized glass. The strobes are encased in specially designed glass spheres and housings that are built to withstand the deep-sea environment. Each housing is additionally pressure-tested in a separate facility before being installed on the observatory. But there is always a chance that the housing might fail in real conditions as we saw today. 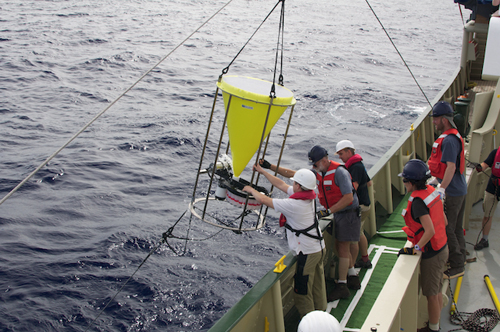 The sediment trap is lifted out of the sea. More floats and a second sediment trap are positioned on the line below. Photo: Debbie Nail Meyer 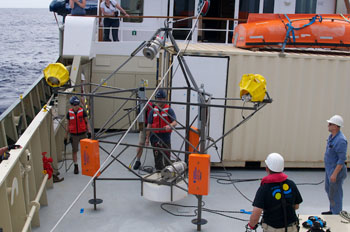 At the very end of the line, the camera tripod system is hauled up. Note the pulverized glass and holes in the right sphere. Photo: Debbie Nail Meyer

Left: A close-up look at the damaged strobe sphere. The housings were pressure-tested before being installed on the observatory but this one failed unexpectedly. Right: The second strobe light and housing remained intact throughout the experiment. Researchers are optimistic that the time-lapse camera system was still able to function adequately with just one operating strobe. Photos: Debbie Nail Meyer

Ken and Alana will analyze the data to determine when the sphere cracked, but the most likely scenario is that it happened as the observatory descended to the seafloor last August. Since the camera could still record images with only one functioning strobe, the researchers were optimistic that there would still be usable images.

Overall the recovery was a success and work begins now to prepare the observatory to go back in the sea.