The winds reduced enough through the night for us to return to sampling today, even though the ocean swell remained substantial. But first we had to find Sargassum. As predicted, the previous day’s rough weather had scattered any larger aggregations of the algae. The panoramic view from the upper bridge deck was 360 degrees of seemingly empty blue seas around the Lone Ranger when we began the search. However with many sets of eyes and binoculars scanning ahead, we eventually came across some dispersed windrows of Sargassum, long lines of the algae that were accumulated by the wind. 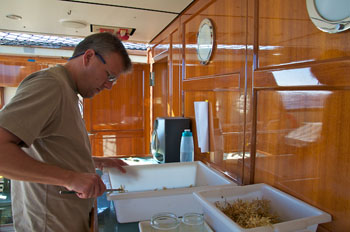 Michael Risi sorts through pieces of Sargassum seaweed, shaking off the small shrimps, crabs, barnacles, and snails that are found within its fronds. Small sample jars were used to separate out the different species. Photo: Debbie Nail Meyer

The science team conducted the standard collection and sorting procedures at this location. In these samples we found a few more crabs carrying eggs, but once again saw no signs of the elusive Sargassum fish, Histrio histrio. 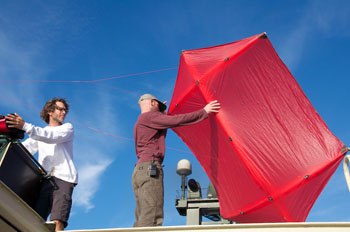 Unlike typical kites that have rigid poles made of fiberglass, KAI kites have been specially designed with lightweight frames formed by air-filled bladders that are inflated with a pump or gas cartridge before the kite is launched. Photo: Debbie Nail Meyer

The Kite Assist Institute (KAI) team launched several kites today and explained some of their unique design features. One noticeable difference is the frame itself. Instead of using fiberglass or carbon fiber for the frame structure, KAI kites have air-filled tubes that form the frame. To launch the kite, the operator simply pumps up the kite frame with air using a standard pump or gas cartridge. This lightweight design makes the kite highly portable and usable in a wide range of conditions where assembling a more standard kite would not be possible. This kite is also specially shaped for stability. The bottom strut is more curved than the top to help keep the kite oriented. It doesn’t need a trailing tail—a plus in close working environments where the tail could get easily become entangled. 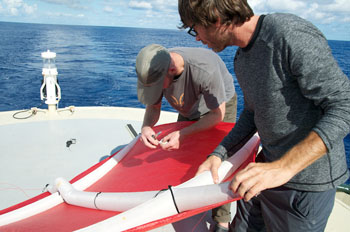 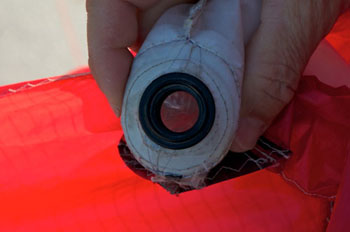 A view into the air bladder inside a kite frame. Photo: Debbie Nail Meyer 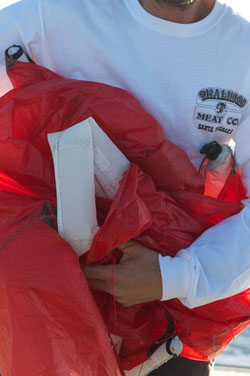 To store the kite after deployment, Don Montague simply opens a valve and squeezes the air out of the kite’s frame. This strong and lightweight design also makes the kites easy to transport and deploy. Photo: Debbie Nail Meyer

As weather conditions continued to improve during the day, the researchers soon turned to preparations for recovering a deep-sea observatory that has been at this location on the seafloor at five kilometers (more than three miles) deep for the last six months. Co-principal investigator and lead engineer for the observatory Alana Sherman briefed the ship’s crew and science team on the procedures that would be needed to bring the equipment safely back on the ship. She showed images and video of the previous recovery in August to familiarize new crew members with the process. She and Ken Smith then led a walk-through of the working areas. 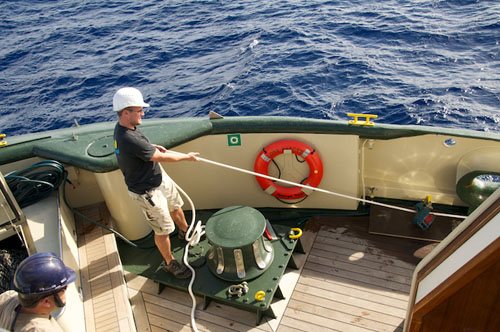 Lead Deckhand Michael Utley tests the capstan, a motorized cylinder that will be used to wind-up the line of the deep-sea observatory as it is lifted onto the ship. Photo: Debbie Nail Meyer

Weather permitting, the research team will send an acoustic signal to the deep-sea observatory in the early hours tomorrow morning to begin the recovery operation.