With stormy weather approaching, the science team focused on collecting and processing Sargassum samples as quickly as possible during the morning while conditions were still adequate for operating the tender boat. Here at Station 5, the surrounding seas look as blue and featureless as the days before, but our samples and instrument readings give clues to the subtle changes taking place as we travel farther south and west. The sea surface temperature has warmed to 24°C (75 °F) and the water continues to be a salty 36.8 parts per thousand (ppt), the upper end of the world ocean average range. The rafts of Sargassum appear to be miniature islands drifting by in a desert-like open ocean. 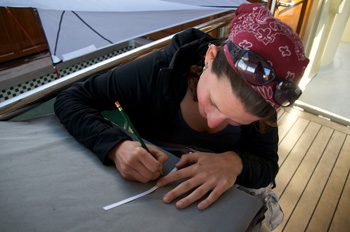 Judit Pungor prepares a set of labels for the genetic samples. Date, sampling location, and species are recorded on the special paper strips.

A main objective of this research project is to characterize the species composition and abundance of fauna associated with the Sargassum across this geographic area. While sorting through each sample and extracting the different species, we already have observed some differences. For example, at Station 5, the samples appeared dominated by small Latreutes shrimp, and Litiopa snails that had been absent at Station 3 were present again. But the final data analysis will be needed to reveal if there truly are any patterns. 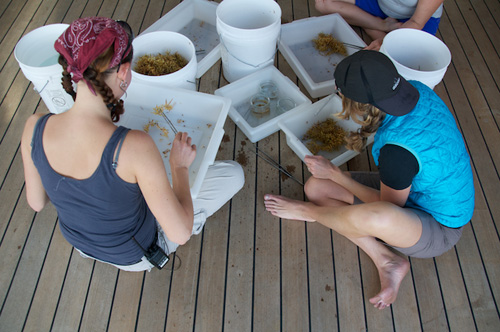 In addition to species abundance, researchers are using genetic tools to understand the faunal community and its relationships. Graduate student Judit Pungor is assisting with this effort at sea for scientist Dan Barshis. Eight of the most common species that were found across all stations in February 2011 are being separated out of each sample for this genetic study. The targeted species represent different phyla and lifestyles. For example, we are collecting a barnacle that lives attached to theSargassum and a mobile shrimp and crab that can move among the fronds. The study also includes a snail, nudibranch and the Sargassum algae itself. The genetic analysis will help reveal the extent of relatedness of species from one area to another. 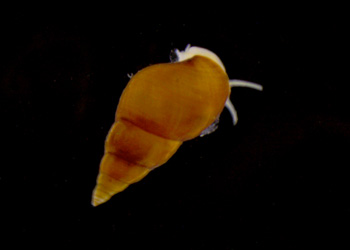 This snail is another common species found on Sargassum fronds. It was absent in samples from Station 3 but was collected again at Station 5. Photo: Carola Buchner

With dark clouds on the horizon, we ended the day by securing loose items in the science lab and working areas in anticipation of rougher weather ahead. 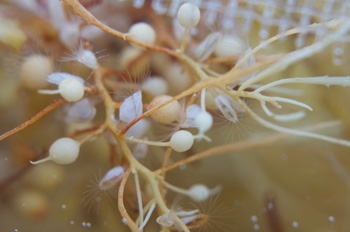 Lepas barnacles are attached to fronds of Sargassum. These species were found at all sampling locations in February 2011 and have been targeted for genetic study. Photo: Debbie Nail Meyer 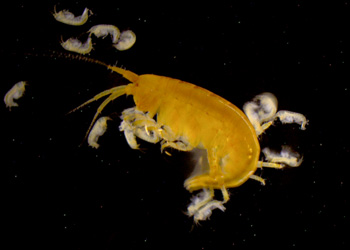 A female amphipod with its recently hatched young. Amphipods carry their eggs in a brood pouch on the underside of their body. Photo: Carola Buchner 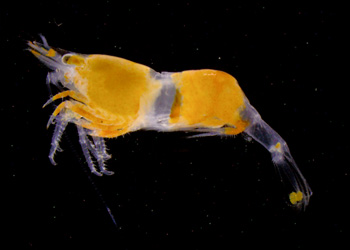