Light winds and calm seas contributed to a smooth transit during the day. The conditions were also just right for the Kite Assist Institute (KAI) team to deploy a specially designed kite balloon, also called a kytoon. Inflated with helium gas, the kytoon provides another option for aerial photography when the winds are too weak to sustain a kite.

The KAI team designed their kytoon to be very aerodynamic, giving it a flattened sphere shape. Their kytoon is about four meters in diameter, holds two cubic meters of helium, and can carry a load of up to one kilogram. It can fly in wind conditions between zero and 18 knots. 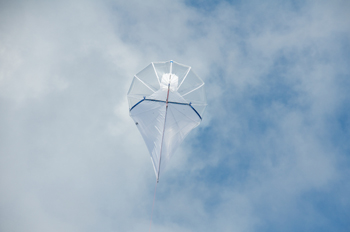 The kytoon flew for several hours and carried a small camera. When the winds increased to eight to 10 knots in the afternoon, the team launched an additional kite with the kytoon still in the air. The two kite platforms carried various cameras in different configurations. In one configuration, a small camera is attached to the kite line and is powered on to record either still images at a set interval or video. The camera just keeps recording until the kite is reeled in and the operator turns it off (or the battery runs out or the memory card fills up). 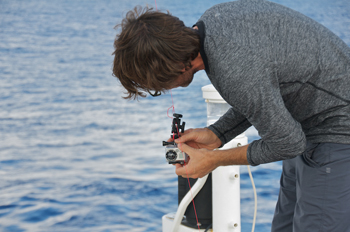 Don Montague attaches a small camera on the line to the kytoon. Once attached, he reels out the kite line to position the camera in the desired height above the ship. 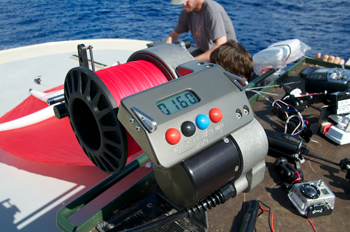 The operator uses this motorized winch to control the kite line, reeling the line in or out to position the kite.

Another configuration uses a gyro-stabilized camera rig that is also affixed to the kite line. The attachment for this system is called a picavet suspension. It consists of two metal bars forming a cross and a single line that is threaded through pulleys on the cross and the kite line attachment points. This design allows the cross to maintain a level position. The KAI team then mounts a gyro-stabilized camera rig to make it ideal for aerial photography.

The KAI team also has motorized camera attachments that can move independently up and down a kite line. They anticipate using the motorized attachments later in the cruise. For now, they have simply adjusted the kite line—reeling it in or letting it out—to adjust the camera rig’s height above the ship. 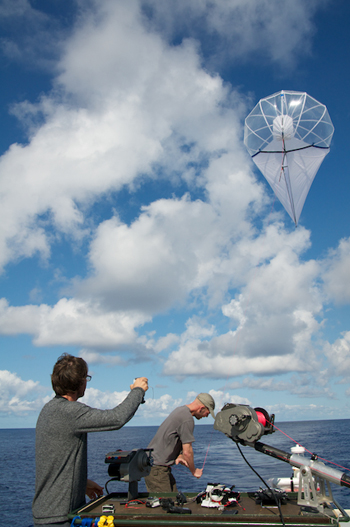 The kytoon flying above the ship. It is about four meters in diameter. Photo: Debbie Nail Meyer

We’ve had some early glimpses into the unique view provided by the kites and kytoons above the Lone Ranger and look forward to more deployments as we continue the expedition. 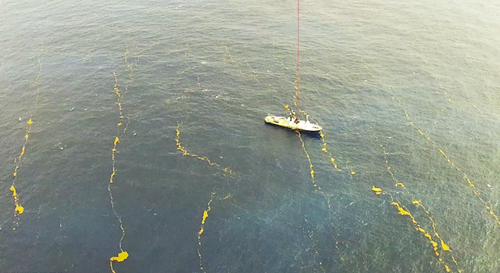 On February 1, a KAI kite system recorded and aerial view of Lone Ranger in a field of Sargassum windrows. Photo: KAI Institute