Today’s experience highlighted the efforts of the Kite Assist Institute (KAI) team to provide supporting imagery of Sargassum and its distribution patterns for the science team. In this post I’ll cover the activities of our busy sampling day and tomorrow will discuss more aspects of KAI’s kite system technology and results.

Early in the morning we arrived at Station 3 and were discouraged to find few traces of Sargassum as we scanned the surrounding waters. We were reminded of previous cruises, where we spent hours searching for rafts of Sargassum, only to find sparsely populated windrows. Using binoculars on the upper bridge deck, I joined the science team in searching for the elusive seaweed. For nearly one half hour we saw only a few fragments drift by. Then we began to see some thin lines of the yellow-brown seaweed in patchy windrows. It seemed the best we would find, and the crew readied the small tender boat for collections. 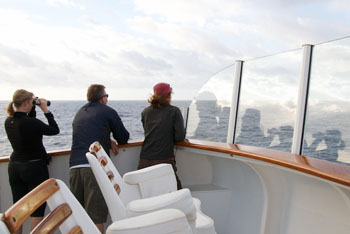 The team completed sample processing just before lunch, scarcely getting one-third of the targeted volume. But our fortunes improved in the early afternoon when the ship encountered some larger windrows of the seaweed. As we processed these additional samples we couldn’t believe our eyes when the largest-seen-yet mats of Sargassum drifted past the ship. Multiple long windrows of the algae could be detected to the horizon. Some of the rafts were the size of a bus.

The tender boat approaches a large raft of Sargassum.

Don Montague and Joe Brock jumped into action to launch a kite with a camera platform they had been configuring and testing the evening before. Up to now they had deployed kites that carried fixed, small cameras set to auto-record still images at a determined interval. In contrast, the gyro-stabilized camera orientation platform is suspended from the main kite line with a network of lines and is independently winched up the kite line via a motor. The platform orientation and cameras are controlled over a wireless connection from a phone, tablet, or computer with readily available software. Don and Joe monitored the live video and reported their findings to the science team. 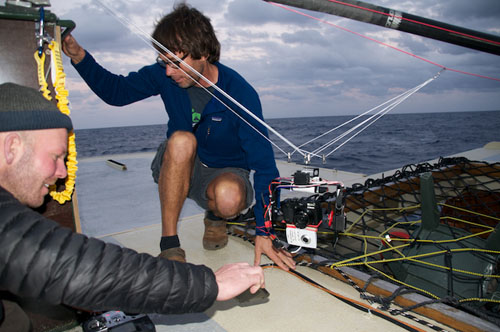 Joe Brock and Don Montague test a gyro-stabilized camera orientation platform. The platform is suspended from the main kite line and winched up independently using a motor. In this configuration, the small white camera sends live video back to the team via a wireless connection that is viewed on a handheld device or laptop computer. They can control the frame orientation and black camera remotely over the wireless connection. 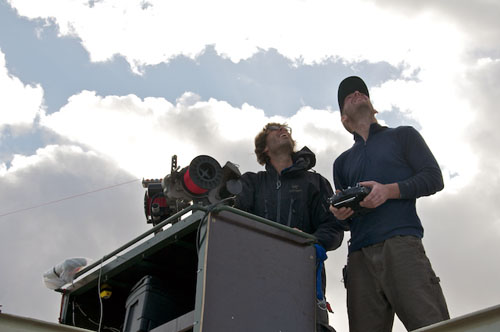 Don Montague and Joe Brock monitor the kite and control the camera systems from the upper aft deck of Lone Ranger.

The large Sargassum rafts also provided a unique opportunity to capture underwater imagery. Don used a pole-mounted camera to film beneath the seaweed canopy from the small tender boat. Back on the Lone Ranger, Don has been sorting through gigabytes of video and still footage collected by the KAI camera systems. Tomorrow he is presenting the next “seminar at sea” to show some of their early results.

Our serendipitous Sargassum find allowed us to finish Station 3 in one day and begin traveling toward the next sampling location 445 kilometers southwest (240 nautical miles) where we will arrive by Friday morning. 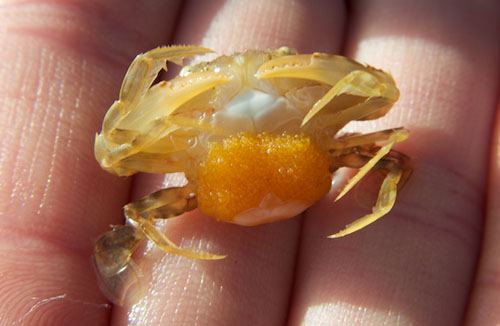 Researchers found a female crab carrying eggs in Sargassum samples from Station 3. They expect these and other signs of spring to become more common in the southern sampling sites. 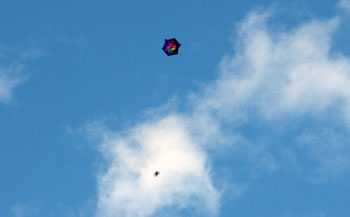 The camera platform looks like a spider as it travels up the main kite line.