January 31: Life in the Sargassum

The science team completed sampling at Station 1 today, processing nearly 13 liters of Sargassum material. This was well above the targeted 10-liter objective, a sometimes challenging goal at several stations last February and August when Sargassum coverage was more sparse. We did notice a weather change today that began last night around sunset as rain squalls moved through the area, producing a water spout on the horizon at dusk. During today’s mostly overcast conditions and choppier water, it seemed that the Sargassum windrows were smaller and more spread out. 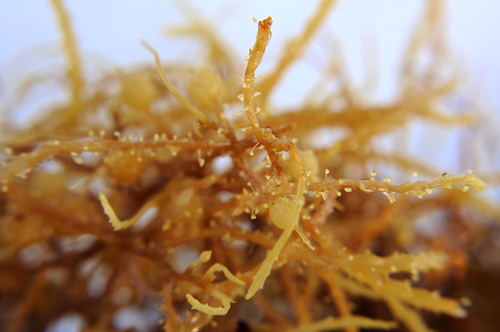 Clumps of Sargassum were readily collected from the first sampling location. 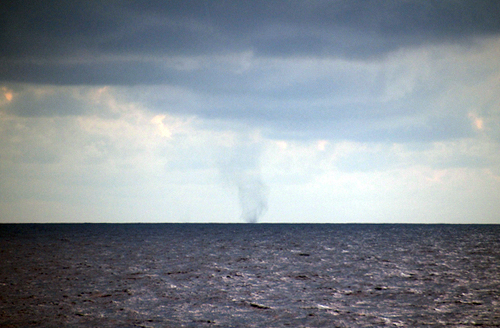 Just after sunset on Monday evening, a water spout was observed on the horizon.

Nonetheless it was a brief effort by the crew to collect the remaining Sargassum samples needed to finish Station 1. After each collection, the science team repeated sorting procedures that involve vigorously tapping algal clumps against a white sample tray to dislodge the inhabitants. Specimens were then sorted by types into separate sample containers. Shrimps, crabs, nudibranchs, amphipods, flatworms, barnacles, anemones and other species were separated. 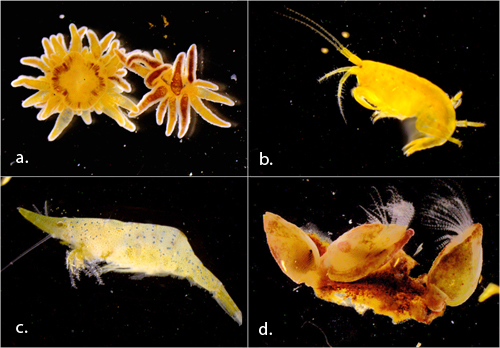 a. We found several of these tiny anemones for the first time which are reported to be very common in Sargassum.
b. This abundant amphipod species blends into the golden-brown seaweed fronds.
c. Like most of the sealife found with the Sargassum, this shrimp species has also adapted coloration to help camouflage it from predators.
d. The waving appendages of these barnacles were constantly in motion in the sample dish, making it challenging to capture a clear photo. Photos: Carola Buchner

I noticed that the numbers and types of species had changed from our last sampling in August, indicating a seasonal difference from summer to winter. Species that were most abundant in August, such as crabs, were nearly absent today. I was also surprised to find several flatworms and some tiny anemones, as I didn’t recall finding these species in August. The data records from this and previous cruises will be analyzed when the scientists return to MBARI. 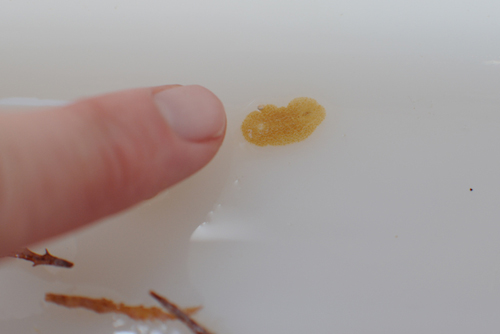 A small flatworm was dislodged from the seaweed. While known to be common in Sargassum, flatworms were not found in August.

Research efforts have been augmented this cruise by excellent microscopy skills. Judit Pungor worked today in the science lab using a high-end trinocular microscope and video system to capture important reference images of each major species being collected.

The day wrapped up with co-principal investigator Alana Sherman presenting the first “seminar at sea” in which she gave an overview of the project history, science objectives, and technology. Her talk ended with a slideshow showing some highlights from today’s microscope work.

Now the ship is traveling through the night to reach our next sampling location, 350 kilometers (190 nautical miles) to the southwest.