Today the Schmidt Ocean Institute ship the Lone Ranger departed from Bermuda to begin the third segment of the Sargasso Sea research project led by Ken Smith and Alana Sherman. The science team was encouraged to see several large patches ofSargassum seaweed drifting past the ship as we traveled away from Bermuda toward the first sampling station. 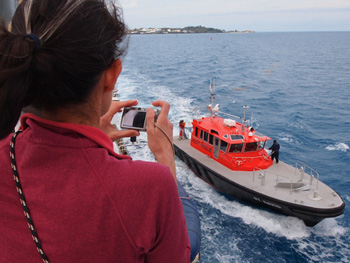 Alana Sherman watches the pilot boat that accompanies the Lone Ranger as it is safely maneuvered beyond the reef areas that surround Bermuda. Photo: Carola Buchner 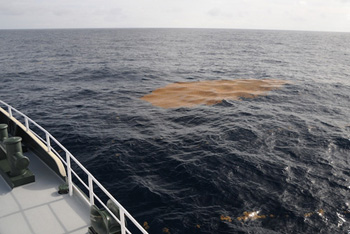 Large patches of Sargassum seaweed were encountered along the way to the first sampling station. Photo: Debbie Nail Meyer

Our path took us over the historical position where naturalist William Beebe and engineer Otis Barton made history in the 1930s when they descended in a bathysphere submersible to 1,000 meters depth (more than 3,000 feet). Beebe and Barton were pioneer explorers of the deep ocean. Captain Bernd Buchner sounded theLone Ranger’s horn in tribute to their inspirational accomplishments.

We continued along our way for several more hours to reach Station 1, about 75 kilometers (40 nautical miles) southeast of Bermuda. Don Montague and Joe Brock from Kite Assist Institute (KAI) took advantage of the favorable conditions to deploy several different kites with cameras that photographed the Lone Ranger and the surrounding seas. The kites were launched into the air from the roof deck over the aft salon. A rectangular structure that was custom-built in port by chief engineer Miro Mirchev anchors a long boom resembling a commercial fishing rod, and provides a seaworthy working area for the team and their array of gear. The boom guides the kite line and extends out prominently over the roof. 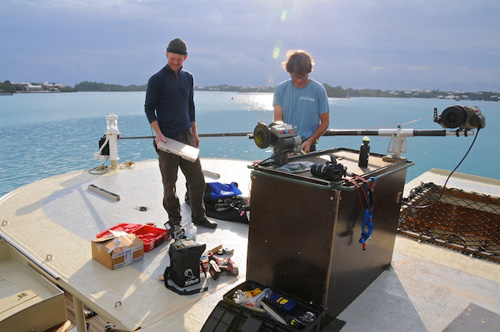 Each kite carried a camera and instruments for measuring several other parameters, such as position and altitude. On one deployment, Don Montague sent the kite to nearly 1,000 meters (3,000 feet) above the ship. Tomorrow they will test real-time video from the kites. Key photos from today’s flights showed the ability of the kites to capture critical images of Sargassum patches that Smith and Sherman will use with collaborators who are working to detect Sargassum from satellites. 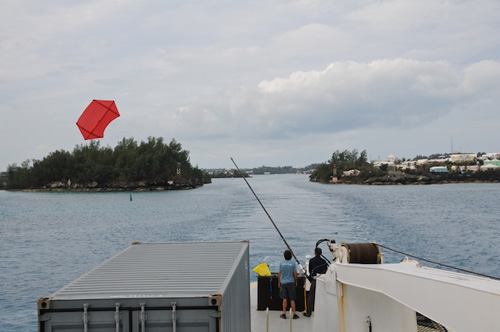 We passed through many more large patches of Sargassum throughout the afternoon until we reached the area designated Station 1. The rescue boat Scout was lowered into the sea with Susan Von Thun aboard to guide the seaweed collections. They motored to a patch that was more than twice as big as Scout. Within minutes they had scooped several buckets of seaweed and returned to the ship for processing. The science team worked past dinner time to finish the unexpectedly large volume of material. 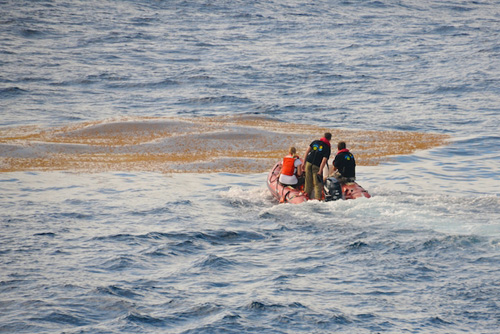 Tomorrow we will complete our sampling at Station 1 in the morning, and then begin the overnight journey to Station 3 that is 350 kilometers (190 nautical miles) to the southwest. All in all, we had a very busy and productive first day at sea. 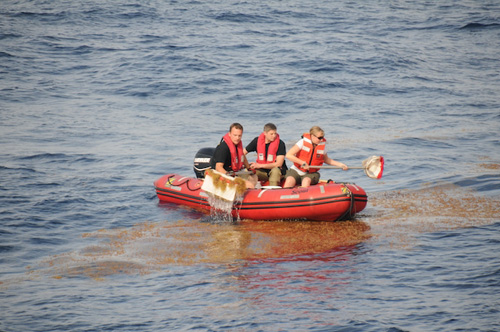