With the sun shining brightly, I started the day on the flying bridge of the ship in my lookout position for Sargassum. The calm conditions offered great promise for finding more sizeable seaweed aggregations for one last dive of ROV Phantom.

The ship soon passed through an area with long windrows of Sargassum that appeared to be larger than any we’d seen so far. Dale Graves and Alana Sherman readied Phantom and launched it in the water. Alana expertly piloted the ROV away from the ship toward the seaweed and began the video observations. 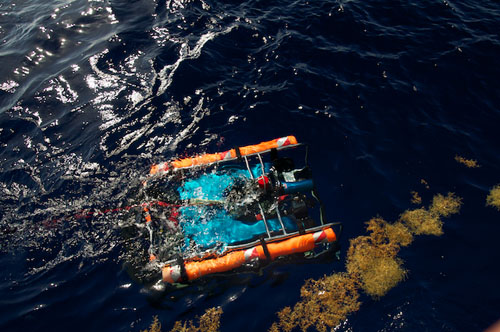 During the dive, fragments of seaweed drifted right next to the ship, a golden swath against the deep blue ocean. I grabbed my camera and took photographs of it from above. The water was so clear that I caught a glimpse of a Sargassum fish under the canopy. While watching and photographing I also saw a long, striped fish swimming in-between the patches. I called for Jeff Drazen to take a look and he tried unsuccessfully to catch it with a net. The fish was unusual enough that it was difficult to identify. Jeff has been looking at my photos to see if he can figure out the species but for now it’s still a mystery. 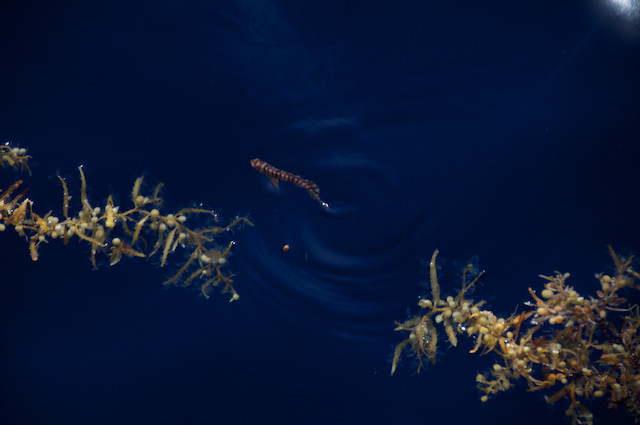 An unidentified fish swims between two fragments of Sargassum.

Later we took advantage of the weather and seaweed to have a small team of snorkelers take a look first-hand. We swam out from the ship to explore, taking pictures and collecting samples in jars. I continued to be amazed at just how well camouflaged the animal life is on the Sargassum. I even had some idea what to look for from my experience sorting samples on the ship, but I still had difficulty seeing any animals. We did have one silvery jack swim near as we returned to the ship.

Jeff Drazen snorkels under a patch of Sargassum.

In the evening we recalled the baited camera from the seafloor and brought it back onto the ship. When all the gear was stowed and the last science measurements completed, the ship began the transit to the Bahamas.