ROV Phantom dove into the Sargasso Sea today and gave researchers a different perspective of theSargassum seaweed community. The robotic vehicle also served as an experimental platform for new science questions that had been inspired by observations during this expedition.

The idea for the experiment arose from observations on animals in the Sargassum aggregations and the baited camera experiments. The science team used the ROV to transport a sample of Sargassumand observe it with the vehicle’s camera. What is the fate of the animal life on the seaweed with increased depth? They also wondered if, at some critical depth, the floats of the seaweed would implode from increased pressure, making the fragment heavier and helping it sink to the seafloor.

Over the past two weeks, we have not encountered the large rafts of Sargassum seaweed that characterize the region. Seasonal storms, weather, and currents play a part in this dynamic nature of the Sargassum community. Even with satellite images showing potential aggregations, these patches were broken-up and dispersed before we arrived just a few days later. In the baited camera experiments, the resulting images suggest that deep-sea scavengers are attracted to Sargassumseaweed. Some scavengers appeared to be grazing directly on the seaweed while others seemed to be preying on the grazers. Where does the seaweed go? How much Sargassum makes it to the deep sea? If it does sink, do the animals go with it? 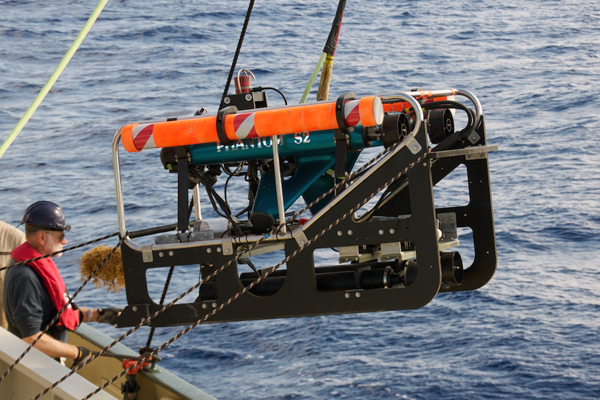 Ken Smith handles the tether line to ROV Phantom during launch into the Sargasso Sea. 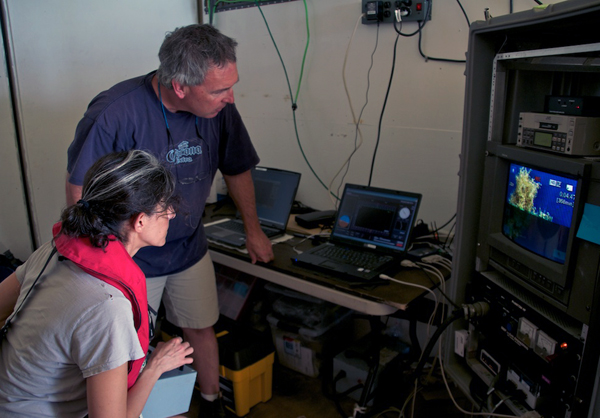 Alana Sherman and Dale Graves operate the ROV Phantom. The video shows a piece of Sargassum seaweed that was attached to the robot for observation.

During the ROV dive, researchers monitored the Sargassum sample on the live video feed from ROVPhantom during the dive to 60 meters depth (180 feet). Many of the animals were seen swimming away from the Sargassum when it first went into the ocean. But one crab stayed on the patch to 52 meters depth before it jumped off. The floats of the Sargassum seaweed remained intact and unbroken during the whole dive.

Tomorrow we’ll dive the ROV again and retrieve the baited camera system one last time before finishing up the last science operations of the expedition.