This morning we retrieved the baited camera system from 5,000 meters deep where it had sat on the seafloor for 40 hours. Jeff Drazen and John Yeh were anxious to see the pictures from the camera. It was the first time that anyone had used Sargassum seaweed as bait and they didn’t know what to expect. Would the seaweed give off enough of a smell to attract any scavengers? Would 40 hours be long enough to observe any animals or would the seaweed need longer to decompose before scavengers would come? 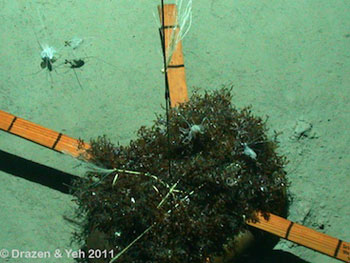 Several large isopods and tiny white amphipods scavenge in the Sargassum. One in the upper left corner appears to be holding a piece of the seaweed in its mouth.

The researchers were excited to see images from the camera and share the results. Jeff gave a brief presentation in the late afternoon to show the preliminary findings. Animals were definitely attracted to the seaweed. The time-lapse camera photographed a progression of animals with the first scavengers arriving after about two hours of the bait landing on the seafloor. Tiny white amphipods nestled in and around the seaweed. A few small cusk-eels, a different species than the ones we had seen before, moved in an out of the Sargassum. Then large, white isopods—a marine cousin of garden pillbugs—came into view and appeared to be grazing on the seaweed. A few photographs even showed one of these isopods swimming away from the bait holding a chunk of seaweed in its mouth. Was it transporting the seaweed to a burrow? Or was it moving away from the bait to avoid being eaten by another predator?

During the day we also collected Sargassum from the small boat as we’ve been doing. The windrows of seaweed were few and far between and stretched out by the wind. It took lots of effort by chief officer Sergiy Sokirko and lead deckhand Francesca Truter to collect a little over two buckets of Sargassum. But it as worth the effort when we saw what came back. During the sorting, we found a ball of Sargassum that was held together with a mass of fish eggs, most likely flying fish. While we inspected the eggs we noticed that there were some tiny fish swimming around, as though they had just hatched from the eggs. Within a few minutes, more and more tiny fish hatched and we watched in amazement. 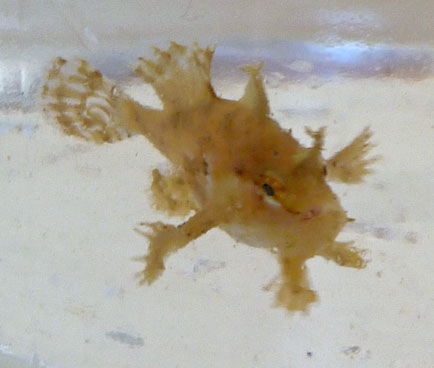 A tiny Sargassum fish was found in samples today. 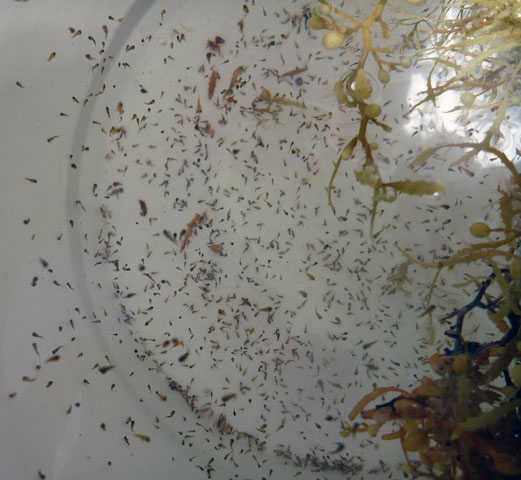 Larval flying fish hatching from the egg mass found on the Sargassum.

Another bucket held more surprises—our first Sargassum frogfish. The frogfish was smaller than my thumb but a perfect miniature of an adult. Its colors, markings, and shape camouflaged it in the seaweed. After we took pictures, made measurements, and let everyone take a look, we released both the fish egg ball and the frogfish in a clump of Sargassum back into the ocean. 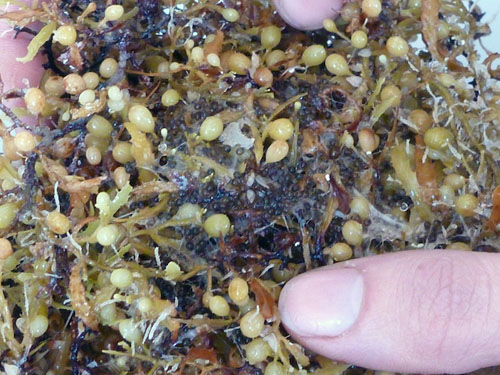 A ball of Sargassum seaweed was held together with a mass of flying fish eggs. 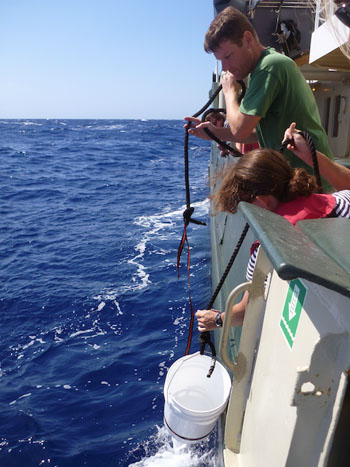 Jeff Drazen and Francesca Truter carefully return some seaweed with the Sargassum fish and larval flying fish back into the ocean.