The rising sun warmed wispy clouds that promised a clear day for science, the calmest weather we’ve had for the entire trip. The top priority for the day was deploying the Sargasso Deep-Sea Observatory.

There were many jobs happening simultaneously on the ship’s back deck to prepare this complex mooring. The camera tripod, sediment traps, and syntactic floats were staged in separate areas then moved into launch position as the day progressed. Working on a ship adds some logistical challenges as space is limited and the ship is always rolling. You must keep gear tied-down so it can’t fall over and break or hurt someone. Even on a calm day, the ship can roll significantly when a set of large swells passes by.

Alana Sherman “seizes” (binds with thread) the final shackle on the camera tripod. 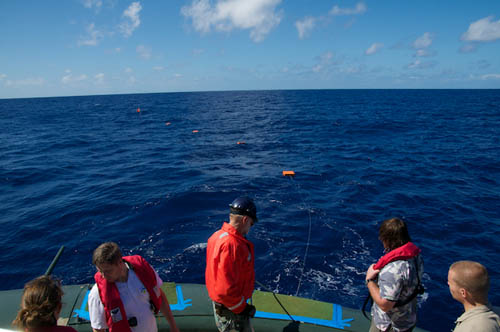 Mast and floats stream out beyond the fantail of Lone Ranger as the Sargasso Deep-Sea Observatory goes into the ocean.

Alana Sherman completed tests of the camera tripod system while Dale Graves readied the lines for the tandem acoustic releases that connect the whole system to anchor weights. When that was ready, the ship’s crane and the strong arms of many crew and scientists moved the anchor weights and tripod toward the side rail to connect them. The camera tripod swayed like a pendulum as the crane lifted it off the deck. Several people pulled tag lines (ropes looped around the equipment) at the corners of the tripod to stabilize its movement during deployment.

When everything was ready to go, Ken Smith gathered the scientists and crew to walk through each part of the deployment so that everyone understood their roles. I put on a climbing harness and tether so I could watch the operation from a platform above the back deck. While up there I clipped the tether onto the platform for safety. The deployment began off the stern of the ship.

First the mast assembly was hoisted into the water and its red flag could be seen bobbing along the waves as it floated away. Then one by one, the heavy orange syntactic floats were lifted onto the back rail and dropped with a splash into the water. Soon there was a line of orange blocks streaming behind the ship.

The operation then moved to the deck area where the sediment traps were staged. The ship’s crane lifted the yellow cone with its attached carousel of sample bottles and lowered it over the side to join the orange blocks. We could see the cone sinking under the sea surface but still visible at quite a distance below the ship in the clear water. 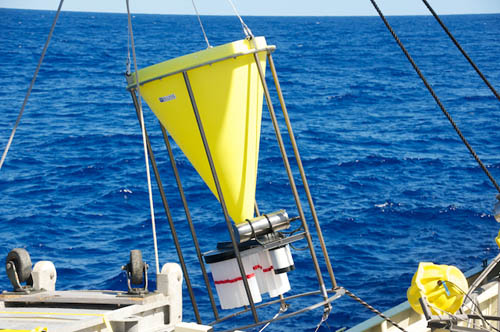 A crane lowers one of two sediment traps for the Sargasso Deep-Sea Observatory. The white bottles below rotate to collect one sample from the yellow funnel every 10 days. 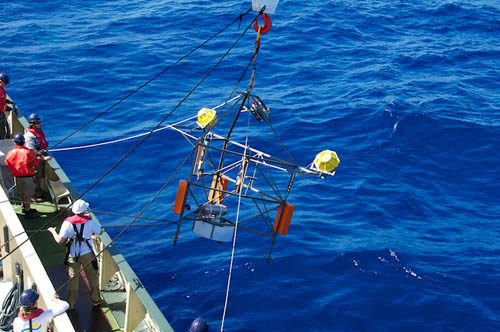 Next more foam blocks were placed into the water until it came to the last sediment trap. The crane lowered the trap in the water where it joined the long line of gear that streamed behind the ship. Finally the crane lifted the camera tripod and anchor and placed it over the side of the ship. We watched it begin sinking to the seafloor, dragging the sediment traps and floats down with it. The mast assembly flag was the last to sink, dipping below the surface about one hour after it had been first put in the water.

Then we turned our attention back to Sargassum. It appeared that today might be the only opportunity to conduct some snorkeling observations as weather forecasts show more storms beginning soon. So we donned our wetsuits, grabbed our masks and fins, and went aboard the tender boat in two groups for some blue water snorkeling. The ocean was an inviting 25°C (77°F) as we jumped in. Pieces of floating Sargassum bobbed up and down in the swells. Small, transparent jellies floated around the water column. Some people saw the crabs and tiny shrimp in the seaweed like we’ve been collecting and small sample jars were filled with these animals while snorkeling. Jeff Drazen caught a glimpse of a flying fish swimming away but that was the only fish observation. The visibility seemed incredible—when someone dove down it looked like they were swimming in outer space, or “inner space” as some have termed underwater environments. 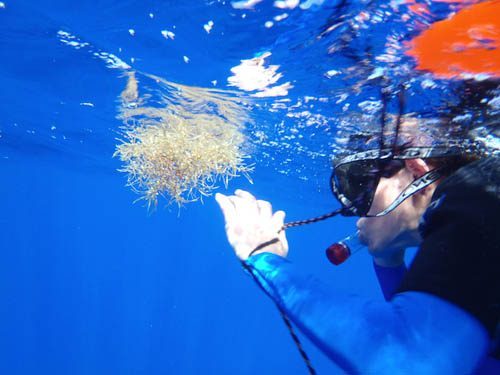 At the end of the day I was on the science schedule to collect seawater for fifth-grade students at Jefferson Elementary in Carlsbad, California. Their teachers had provided me with a water quality test kit that the students used to compare lagoon and offshore water quality in a project with the Ocean Institute. They wondered how the Sargasso Sea might be different. With help from Kathleen Sullivan-Sealey, John Yeh, and bosun Lars Tonsfeldt we collected the water and ran the tests. The results were consistent with measurements that Kathleen’s hydrolab instrument recorded earlier in the day and with what we expected in this nutrient-poor, open ocean environment. Nitrate and phosphate were undetectable; dissolved oxygen was saturated at 4 parts per million and pH was 8. We estimated water transparency from snorkeling earlier was more than 25 meters (80 feet) deep.