We arrived at our southernmost station this morning and began a long list of science activities. First we deployed the baited camera system, this time with a new twist: Sargassum seaweed as the bait. Generally mackerel or tuna species are used for bait since these types of fish give off an oily smell that mobile scavengers can sense. But Jeff Drazen was interested to find out if scavengers are also attracted to deposits of Sargassum, and if so, what species? No one really understands howSargassum enters the deep-sea food web and this deployment may yield some valuable observations.

Once the baited camera system was in the water and sinking toward the seafloor, researchers began preparing another time-lapse camera system. Alana Sherman, Ken Smith, Dale Graves, and Jake Ellena used the relatively calm weather window to assemble the deep-sea observatory that will be deployed tomorrow and remain here for the next six months.

This observatory is a replica of one that the researchers have been maintaining for more than 20 years in the northeast Pacific Ocean at a location called “Station M.” It records time-lapse images and has sediment traps that are positioned at two different levels above the seafloor to collect particles that rain down from the surface. The unique design of the camera tripod provides a wide-angle view of the seafloor, capturing a 20-square-meter area in each image once an hour for six months. This perspective shows not only the flux of organic material to the seafloor but also the activity of animals. Over time the data collected can show changes in food availability to the deep ocean. 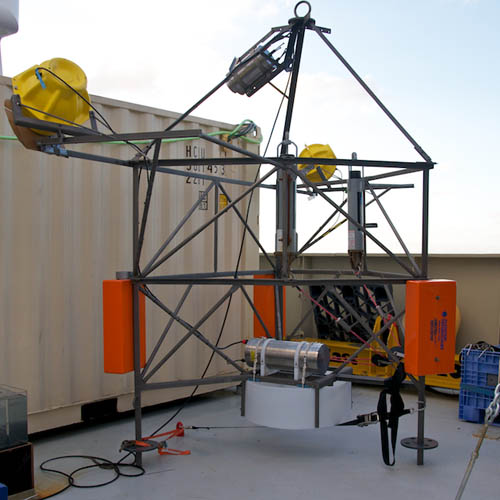 This large, complex mooring was transported in sections to the Lone Ranger and must be assembled here at sea. Alana, Dale, and Ken first worked on the camera tripod, attaching the pressure-tolerant camera housing and strobe lights to the tripod frame and running through a checklist of tests to ensure everything was working properly. 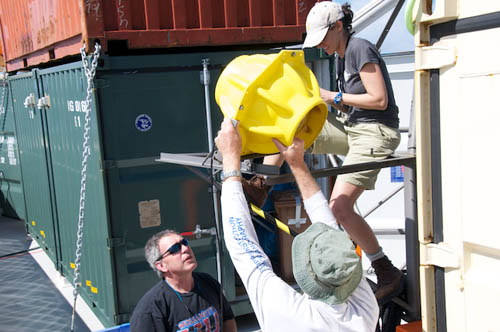 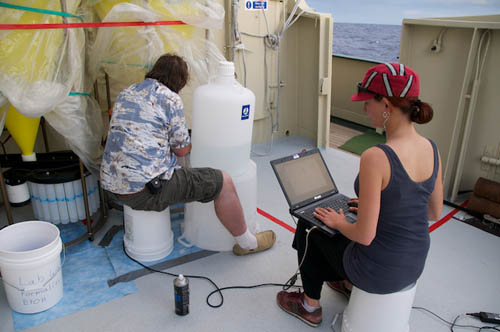 Jake Ellena and Judit Pungor set-up the sample bottles for the sediment traps. Judit uses the computer to rotate the carousel of bottles that Jake is filling with sample preservative.

Another step today involved preparing the syntactic foam blocks that provide the necessary floatation for the observatory. Teams of helpers hoisted the eight sets of 54-kilogram (120-pound) blocks to the staging area at the stern of the ship. Ken then assembled the network of ropes that will connect the foam floats to the mooring. 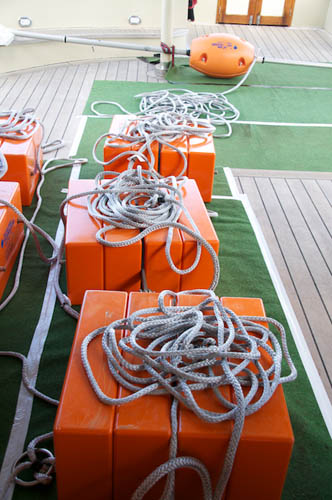 Syntactic foam blocks provide buoyancy for the deep-sea observatory so that it will float to the surface when released from its anchor on the seafloor.

In another staging area, Jake prepared the sample bottles for the two sediment traps. Each large yellow funnel is outfitted with a rotating carousel of bottles underneath that collects discrete samples once every 10 days. With help from Judit Pungor, Jake labeled the bottles and filled them with a mixture of preservatives to maintain the samples for the six-month deployment.

Tomorrow morning the team will finish the last-minute preparations and checklists before launching it into the ocean.