Early this morning the ship was positioned where the baited camera had been deployed two days ago. Jeff Drazen and John Yeh sent acoustic commands to release the system from its weighted anchor at the seafloor. By mid-morning it arrived on the surface—and just in time as the winds began to gust more strongly.

The science team and ship’s crew smoothly retrieved the buoy and frame from the rolling waters, making a difficult job look easy. Jeff and John secured the gear and then extracted the pictures from the camera. Soon after, Jeff called us on the radios that we carry, clearly excited about the pictures that had been recorded. We all gathered in the dining room to view the latest images from the abyss, five kilometers (more than three miles) at the bottom of the Sargasso Sea.

The first striking observation to me was the clarity of the water. The images look almost like they were taken in air. They were sharply focused and showed the entire radius of the baited setup. As in the previous deployment, a large red shrimp and several tiny amphipods were the first scavengers to the bait, arriving within the first half hour after the anchor landed on the seafloor. An hour later the first cusk eel appeared and more soon followed. But what got Jeff and John really excited was the appearance of one very large cusk eel, more than one meter in length. It was the longest of this species that they’d ever seen. Another surprise was a large, all-white cusk eel, an unusual color variety that the researchers had not seen in their past work with baited cameras in other locations. 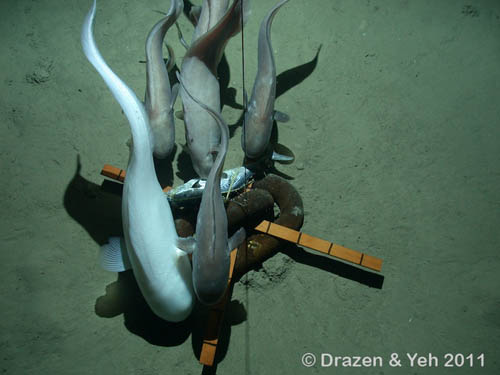 This large white cusk eel is an unusual color variety that caught the attention of the researchers. 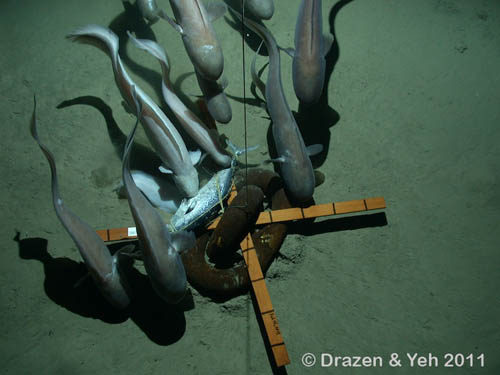 Cusk eels investigate the bait, appearing to orient themselves into an invisible current.

After discussing the findings from the camera system we turned our attention to collecting the last samples of Sargassum from Station 5. Once again we sent a scientist on the small Zodiac—this time Jake Ellena—to dip pieces of Sargassum out of the water with fine mesh nets on poles. We spent the rest of the afternoon sorting through the seaweed samples and preparing the baited camera system for another deployment early tomorrow.

The day ended with a nearly full moon shining from behind breaks in the clouds, leaving a trail of silver light on the waves. 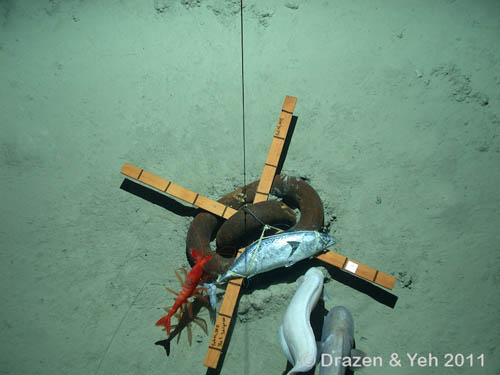 As in the previous deployment, a red shrimp, tiny amphipods, and some cusk eels are attracted to the bait. 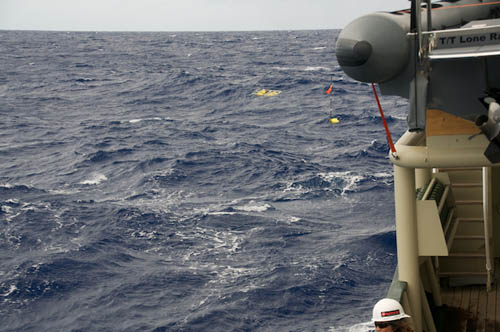 The baited camera system dirfts on the surface as the captain approaches it with Lone Ranger.