Through the night the ship travelled away from Station 5 to an area 130 kilometers northwest in search of larger aggregations of Sargassum. So far we’ve only encountered smaller bits and pieces of the seaweed clustered in long lines parallel to the wind direction called windrows. The science team has collected these but ideally would like to encounter larger patches, at least three to four meters (10 feet) squared in area, especially for surveying with the Phantom remotely operated vehicle. 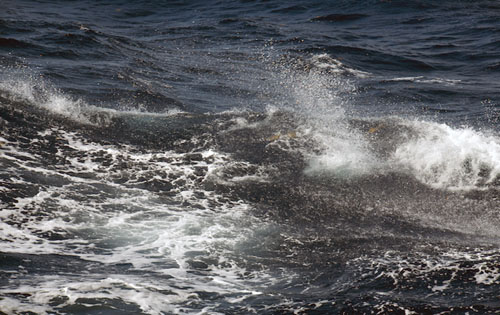 Winds and waves churn around some Sargassum seaweed, breaking it up into smaller pieces.

As covered in the pre-cruise preparations entry, we have been working with a team of satellite remote sensing experts to get up-to-date information on possible Sargassumaggregations as imaged by satellite. Stephanie King of Fisheries and Oceans, Canada and John Ryan at MBARI have been providing us with data and information at sea. Each day Alana Sherman communicates with Stephanie to discuss new positions that may be useful in our quest.

But our experience today was another reminder of how dynamic the ocean can be in a short period of time. Only a few days ago, images from the MERIS satellite showed several large Sargassum patches in this very area, but our survey this morning turned up nothing. Clearly the winds and waves that we’ve been experiencing have played a role in breaking up these patches, much to our disappointment. We had also hoped that by finding a patch in an area that coincided with the satellite images, we could give Stephanie and her colleagues valuable ground truthing for their satellite datasets.

When we didn’t find Sargassum here we turned back to Station 5 to recover the baited camera system, though the weather did not look promising. By the time we left, the winds had begun gusting to 30 knots which didn’t bode well for seaweed collections along the way, either. During the bumpy seven-hour transit back to Station 5, we did encounter one area that had some of the largest seaweed patches that we’ve seen so far. Were these remnants of what the satellite had seen days before, now churned up by the storm and carried away by currents to this new location?

Heading back to Station 5 we some larger patches of Sargassum, but we were unable to collect the seaweed due to rough seas.