Sunshine greeted the ship this morning, infusing the day with optimism for the science ahead. It was my lucky day to be the scientist collector netting Sargassum from the small inflatable boat. Though the seas felt calm aboard the Lone Ranger, I had a different perspective on the inflatable boat. There the large swells bounced us up and down as we motored around looking for seaweed. I was awed by how the Lone Ranger would be hidden in the trough of the rolling swells when I looked back toward the ship. The Sargassum was broken into small fragments but we could follow rows of the bits of seaweed (windrows) aligned along the waves. As we scooped our nets into the vibrant blue water, I was struck by its transparency and wanted to jump in with a mask and snorkel to look around. I’ve never seen water so clear and so blue. I tried to imagine the sea life from the surface waters down to the seafloor 5,000 meters below. What lives there? I didn’t have to wait very long to find out. 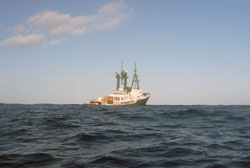 A view of the Lone Ranger looking back from a small zodiac. The large swells hide the fantail of the ship. 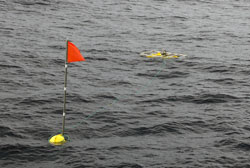 Spar buoy and baited camera system return to the surface after 24-hours in the deep.

Just after lunch, Jeff Drazen and John Yeh began the recovery procedure for the baited camera system. They communicated with the instrument by lowering an acoustic transducer into the water to send signals. The camera system responded with its own signal that confirmed all was working. The researchers then sent an acoustic command to trigger the release of the weights that anchored the system to the seafloor. For the next few hours we waited for the camera system to rise from the seafloor, eagerly anticipating its return to the surface. We began to scan the horizon for the red flag of the spar buoy once the ship’s bridge received radio transmitter signals from the beacon at the top of the buoy. In no time the buoy was spotted and the ship maneuvered into position to bring the camera system back on deck.

After the buoy and camera frame were safely tied down on the ship, Jeff and John extracted the camera from its pressure housing and downloaded the images from the memory card. The researchers excitedly viewed camera images that showed the weights and bait on the seafloor. The camera and strobe light had been programmed to take a picture once every two minutes after the system had sunk to the seafloor nearly two hours after dropping it from the ship. They then scanned through the images one by one to see when and what critters were attracted to the bait. 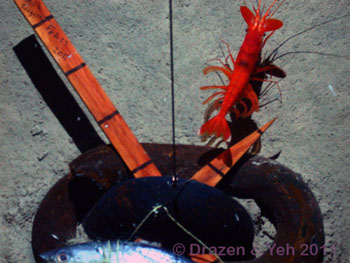 A red shrimp and tiny white amphipods are the first to arrive at the bait, 5100 meters on the seafloor. 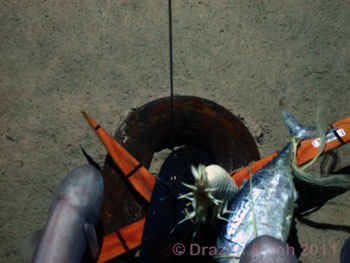 The white giant amphipod in the center of the image is at least 10 centimeters long. 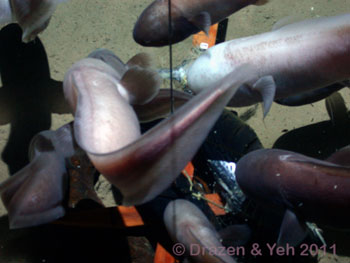 Several types of cusk eels are attracted to the other scavengers at the bait.

The images showed that within an hour a large red shrimp and many tiny whitish amphipods had found the bait. As time progressed, two to three different species of cusk eels and a rattail fish arrived. One creature that caught Jeff and John’s attention was a giant amphipod, at least 10 centimeters (four inches) long. The images showed that the amphipods and shrimp scavengers consumed the fish bait from the inside out over the 24-hour period that the camera system remained tethered to the seafloor. Jeff speculates that the fish may have been preying on the amphipods directly as they didn’t appear to be biting the bait, based on their orientation and the lack of bite marks.

The researchers are still analyzing these images and are preparing for another deployment tomorrow afternoon when we reach the next science station about 450 kilometers south. 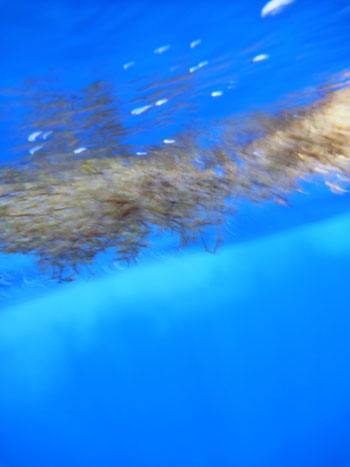 Underwater view of Sargassum that gives a sense of water color and clarity.