After rolling through the night with winds howling, we woke to slightly better weather conditions that allowed us to move forward on getting instruments in the ocean for science. Everyone was excited to start collecting data for their studies.

We began the morning with water quality sampling. Kathleen Sullivan Sealey readied a cylinder of sensors that measure conductivity (a substitute for salinity, the saltiness of water), temperature, pressure (a substitute for water depth), pH, and oxygen. The cylinder is connected to a line and lowered into the ocean to take measurements that are stored on internal memory. Kathleen also connected a Niskin bottle to the line for water collection. Niskin bottles are a common part of an oceanographer’s toolkit. They are designed to capture a water sample at a specific depth. The cylindrical bottle has lids at each end that remain propped open when it is lowered into the water. When the bottle reaches the desired depth, the researcher sends a weighted trigger down the wire which triggers the lids to close and trap water from that depth in the bottle. 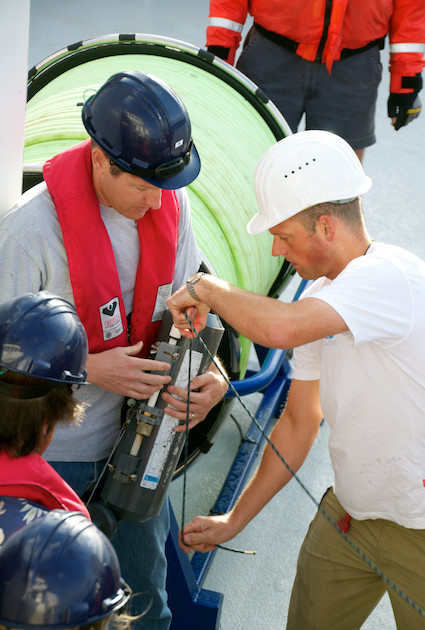 Jeff Drazen and deckhand Lars ready a Niskin bottle for deployment. A Niskin bottle is designed to collect seawater from a specific depth by sending a messenger on the wire to trigger the bottle to close.

We brought the Niskin bottle to help scientists at the Bermuda Institute of Ocean Sciences (BIOS) collect a water sample for their long-term studies in this area. This collaborative spirit is common in oceanography where the remoteness of the ocean and the difficulties of building long-term data sets foster some creative solutions.

The sensors and Niskin bottle were lowered down to 200 meters depth then brought back up to the ship to download the data and water. Interestingly the temperature showed little variation within that depth range, staying around 20°C (68°F). To verify this result, we plotted data from previous measurements by BIOS scientists in this area at the same time of year. Our observations are consistent with what is typically found in February when winter storms mix the surface layers and deeper water. In contrast, during the summer, long hours of sunlight and reduced winds allow a shallower lens of warmer, saltier surface waters to develop. 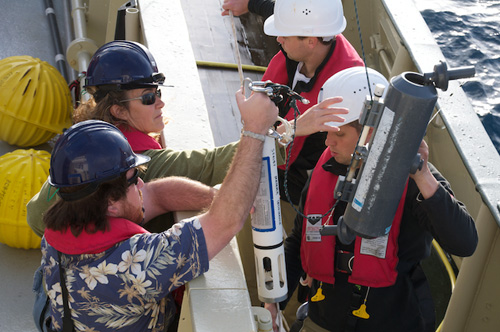 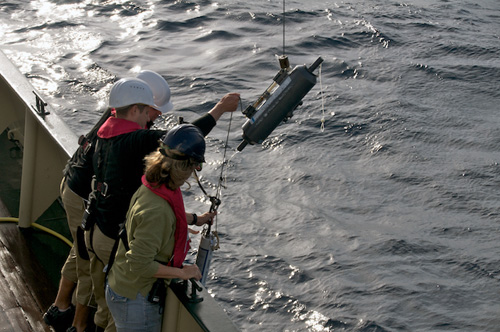 The Niskin bottle returns to the surface and is being hauled out on deck. The ends have closed to trap a water sample inside.

The working deck continued to be washed in waves during the deployments. As Captain Bernd Buchner said, “the seas are chaotic” as 25-knot winds came from one direction and swells from another. The combination created impressive waves that would sometimes travel up the sides of the hull and across the deck. Amongst all of the turbulence of whitecaps and deep blue ocean, we had our first sighting of floating Sargassum seaweed. They were small fragments, the largest being about the size of a dinner plate. The storms most likely had broken up any larger Sargassum patches that might have been present. The rough seas and lack of Sargassum kept the remotely operated vehicle (ROV) on deck for this station.

Though the seas were too rough for the ROV, it seemed as if this was the only available window at this sampling station to deploy the baited camera system. Jeff Drazen and John Yeh prepared the cameras, checking and double-checking batteries, data transfer, vacuum seals, nuts, and bolts. Jeff held a team meeting with everyone who would be on deck during deployment to walk through the process and each person’s role. A little over an hour later, everything was in place. The winds and seas continued to interfere with each other and added challenges to everyone’s work. The first section to go in the water was a spar buoy, a 6.5-meter-long pole with a large red flag at the top. Following the buoy was a line, attached to the buoy and the camera frame. Underneath the frame was a set of weights baited with fish. The weighted end traveled down 4,500 meters to the seafloor where the frame floats above the bait with cameras and flashes pointed downward. A computer inside a pressure-tolerant sphere controls the cameras to take pictures and video at specific time increments. We’ll see the images tomorrow evening when we bring the system back onboard the ship. For now, it will sit on the seafloor for the next 24 hours and hopefully the bait will attract some of the denizens of the deep. 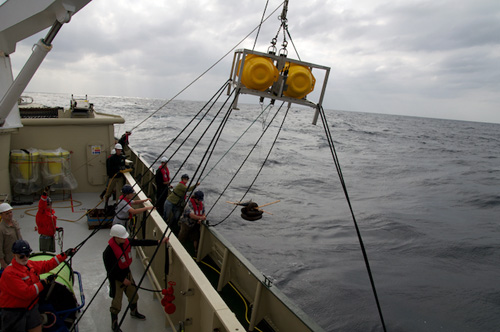 The baited camera system is deployed off the deck of Lone Ranger. The frame with yellow floats houses a video camera, still camera, and data logger that point toward the seafloor. Anchor weights and bait land on the seafloor under the frame and the bait attracts scavengers like fish and crabs. 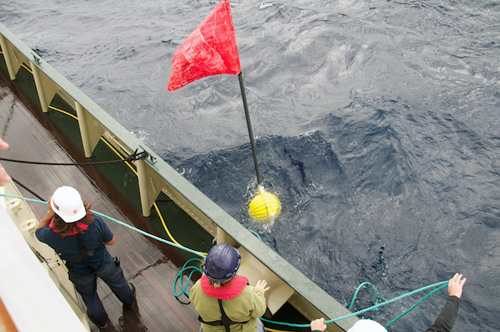 A Spar buoy for the baited camera system is put into the water first then followed by the frame and bait.

After a full day of science I’m sitting at a desk late in the evening as the ship continues to heave up and down beneath me. I’ll be sure to put my computer away before I head to sleep and will secure anything that might fall over in the night. It’s all part of adjusting to working at sea and the challenges that even simple tasks—like walking across the floor without bumping into things—become not so simple to do.