Prochlorococcus: A window into the photosynthetic machinery of the oceans 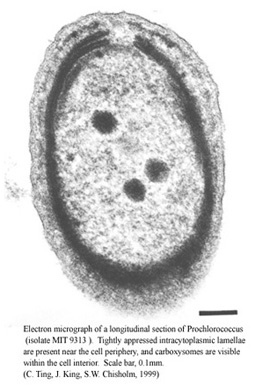 Fifteen years ago, a tiny (0.7 microns in diameter) prokaryotic phytoplankter was discovered in the North Atlantic Ocean. This phytoplankter has proven to be an important primary producer in the sea. Members of this group, which we named Prochlorococcus, sometimes comprise over half of the total chlorophyll in regions of the oligotrophic oceans. Multiple ecotypes of Prochlorococcus have been identified, which are adapted for optimal growth and photosynthesis at different light intensities. Thus what appears to be a stable homogeneous population is actually a mixture of genetically distinct physiological types (ecotypes) which alternate in dominance as the mixed layer of the surface oceans changes. This genetic diversity allows the group to thrive over a broad range of environmental conditions in the oligotrophic oceans.

We now have the complete genome sequence of two Prochlorococcus ecotypes, and they have proven to be quite different: One has roughly 1700 genes, and the other has 2400 genes. We are working on decoding these genomes, which is yielding new insights into oceanic processes.